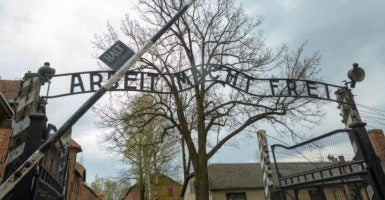 "Surely they would stop it": At 13, Iren Fogel was forced into slave labor at a concentration camp in Auschwitz, Poland, the gates of which are pictured here in April. Now, at 88, Fogel Weiss speaks on behalf of nearly a million Jews who died there, as well as other victims of religious persecution, during the State Department’s Ministerial to Advance Religious Freedom. (Photo: Thomas Long/Polaris/Newscom)

Iren Fogel was only 13 when her family was brought to Nazi Germany’s Auschwitz concentration camp in Poland.

Her parents, four of her five siblings, and most other relatives were murdered upon arrival from a Hungarian-ruled part of Czechoslovakia.

For eight months, Iren and her 17-year-old sister Serena worked and lived next to the crematorium. Every day, they saw young mothers and children and elderly men and women take their last steps because they were Jews.

“We watched them enter the gate that led to the gas chamber,” Irene Fogel Weiss, now 88, told reporters and others Monday at the U.S. Holocaust Memorial Museum’s Hall of Remembrance.

“My brain could not absorb what I was seeing. I thought this place must not be on this earth and that no one knew that this existed, and if they knew, surely they would stop it.”

Weiss, who later added the second “e” to her first name, gave the first of 13 testimonies from victims of contemporary religious persecution who will speak at the Holocaust Memorial Museum over three days, during the first Ministerial to Advance Religious Freedom.

Religious freedom is under attack around the globe. Survivors of modern religious persecution, here as part of the #irfministerial, will stand in the @HolocaustMuseum’s Hall of Remembrance adding their voices to the advancing of religious freedom. Watch today at 11 est. https://t.co/XKdb9clz9O

The conference of foreign ministers, with Secretary of State Michael Pompeo as host, aims to inspire global action against religious persecution and discrimination.

The conference at the Holocaust Memorial Museum will feature survivors of persecution from across the world—Jewish, Christian, Muslim, Tibetan Buddhist, Uyghur Muslim, Yezidi—who speak about their experiences. They’re from countries such as China, Iran, Iraq, North Korea, Pakistan, Sudan, Turkey, and Vietnam.

A picture of Irene Fogel Weiss, showing a bundled-up girl facing the photographer on a crowded ramp at the  Auschwitz-Birkenau camp, hangs in the museum where she now volunteers.

“It is tragic that over 70 years later, the world is faced with other regimes that commit hideous atrocities against its own citizens,” Weiss said.

Beginning Tuesday, each day of the conference will focus on a specific topic for foreign and domestic representatives and civil society groups, a list not released by the State Department.

Former Kansas Gov. Sam Brownback, President Donald Trump’s international ambassador at large for religious freedom, spoke Monday about what he has seen since assuming his duties Feb. 1. In many countries, Brownback said, persecution and death are common for religious minorities.

“Each and every person in their world has an unalienable right to religious freedom,” Brownback, who is a Catholic, said. “They have that right. Yet, sadly, most of the people in the world live in an environment where religious restriction are significant and often deadly.”

Brownback was a senator and representative from Kansas before his election as governor in 2010. He was re-elected in 2014 and resigned early this year after his razor-thin Senate confirmation to the religious liberty post.

Brownback vowed Monday that the “evil” persecution of and discrimination against religious minorities will be “defeated.”

“I’m delighted that this administration has made this a top foreign policy priority, and we are going to push it and push it aggressively,” he said. “We will use this [conference] to push religious freedom issues around the world … we will seek to find allies to push this topic forward.”