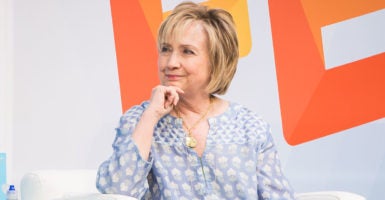 Peter Strzok’s testimony about the email server scandal involving former Secretary of State Hillary Clinton raised headlines because of his defiant, disrespectful, and unapologetic attitude about the bias revealed in his text messages that permeated his work at the FBI.

Then, there was the verbal combat between him and Republican members of the two committees holding the joint hearing, and between the Republicans and Democratic members who were running interference for Strzok and acting as his defense counsel.

The news media jumped on an exchange in which Rep. Louie Gohmert, R-Texas, asked Strzok if he lied to his wife about his affair with former FBI lawyer Lisa Page in the same way as he was in testifying to Congress. That was too much for the Democrats and the media, who leaped to Strzok’s defense.

The media, however, virtually ignored another exchange between Gohmert and Strzok that revealed a potential bombshell. Gohmert asked Strzok about his meeting in 2016 with Frank Rucker and Janette McMillan, an investigator and lawyer, respectively, for then-Intelligence Community Inspector General Chuck McCullough (an Obama appointee).

McCullough sent them to see Strzok, who was the FBI’s deputy assistant director for the Counterintelligence Division, to brief him and three other FBI personnel about an “anomaly” that their forensic analysis had found in Clinton’s server.

According to Gohmert, the inspector general discovered that, with four exceptions, “every single one” of Clinton’s emails—more than 30,000—“were going to an address that was not on the distribution list.”

In other words, according to the information Gohmert received from the intelligence inspector general, something was causing Clinton’s server to send copies of all of her email communications outside of the country “to an unauthorized source that was a foreign entity unrelated to Russia.”

If true, this means that Clinton’s email communication with her top aides, department leadership, ambassadors, and other officials, including President Barack Obama, may have been read by an alien entity, perhaps a foreign power hostile to the United States. That could include confidential, sensitive, and even classified information about our foreign policy or our allies.

Gohmert’s exchange with Strzok doesn’t reveal who the foreign entity is, but if not the Russians, the likely culprit is the Chinese government, which has a special unit of hackers within its military that has long targeted the U.S.

Our intelligence agencies have identified the Chinese as responsible for the biggest data breach to ever hit the federal government, the 2015 hack of the Office of Personnel Management that stole the files, including security clearance applications, of 21 million current and former federal employees.

Here is how Strzok should have responded to Gohmert’s question about the briefing that Strzok received from the intelligence inspector general’s staff:

As the FBI’s lead counterintelligence agent, I understood that this was a major security breach, with widespread implications over the disclosure of sensitive and classified communications.

I immediately implemented protocols to investigate the extent of the problem; to notify all agencies and government officials whose communications had been compromised; to assess the damage that may have been done to specific operations, assets, programs, and personnel; and to prepare recommendations on how to remedy the problems caused by this disclosure.

Unfortunately, Strzok actually said that while he did “remember meeting Mr. Rucker on either one or two occasions,” he did not “recall the specific content or discussions.”

In other words, the FBI’s main counterintelligence director doesn’t remember being told that the secretary of state (his preferred candidate for president) had a breach in her computer system that forwarded all of her internal communications—including emails containing classified information—to a foreign entity.

Since he claimed not to remember being told about something that serious, he obviously did nothing about it.

The question is which of two scenarios is more likely true. Either 1) Strzok was completely incompetent, or 2) his pro-Clinton bias displayed in the thousands of text messages between him and Page caused him to downplay this security issue and ignore it, because it could hurt his favored presidential candidate if it came to light.

Strzok’s anti-Trump, pro-Clinton bias was overwhelming. The texts between him and Page are direct and damning evidence in and of themselves. But there is more. His body language and attitude during the hearing also showed bias against Donald Trump and for Clinton.

His lack of prudent action as an agent when he was briefed about this massive security breach suggests that he may have abandoned his role as a law enforcement officer, and skewed the results of a politically sensitive investigation to serve his own political leanings.

One of the other disturbing bits of information that came out of this exchange was that, according to Gohmert, the Office of the Intelligence Community Inspector General called Michael Horowitz, the inspector general of the Department of Justice, “four times” because it wanted to brief Horowitz about this forensic analysis and this security breach. But, according to Gohmert, Horowitz “never returned the call.”

According to Horowitz’s recent report on the Clinton email server investigation, the FBI “did not find evidence confirming that Clinton’s email server systems were compromised by cyber means,” but they could not definitively determine that her servers had not been compromised.

Obviously, if the intelligence inspector general has information to the contrary, that would be significant.

If this is true, the Justice Department, the FBI, and the intelligence inspector general have an obligation to disclose to the public and to lawmakers the foreign entity that hacked into Clinton’s server and received all of those communications.

That disclosure would be similar to the way they revealed that it was the Russians who hacked into the Democratic National Committee and Clinton’s campaign.

They also need to disclose what steps have been taken to investigate the extent and depth of the problems caused by this potential security breach.

And those in the political arena who have been painting Strzok as some kind of hero who deserves a Purple Heart need to stop insulting our intelligence and our veterans.

If this is an example of how Strzok did his job, he should have been fired long ago, and he is certainly no hero.