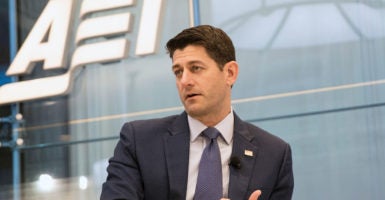 House Speaker Paul Ryan warned that the alt-right was about “identity politics” and said conservatives must reclaim “hijacked” terminology.

“Intellectually do everything you can to defeat the alt-right,” Ryan said Thursday in an interview with Jonah Goldberg, a senior editor at National Review and a fellow at the American Enterprise Institute, where the interview was held.

“It is identity politics, it is antithetical to what we believe, and it’s a hijacking of our terms, just like the progressives hijacked the word, ‘liberalism,’ the blood-and-soil nationalists of the alt-right have hijacked things like ‘Western civilization,’” Ryan, R-Wis., added.

“So we have to go back and fight for our ground and re-win these ideas and marginalize these guys as best we can to the corners.”

Ryan said it was crucial to do a “better job,” adding that, “how do we get the core back, how do we get back classical liberalism, properly understood, in the 21st century so that we can relegate this stuff to the ash heap it belongs.”

“So what do we have to do? We have to go back and reteach and relitigate and relearn and re-expose people to these concepts, that’s the way I see it.”