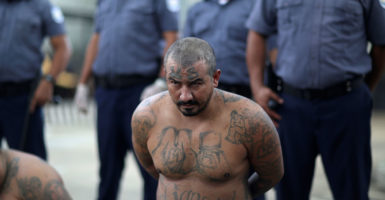 An MS-13 gang member waits to be escorted into a maximum-security jail in Zacatecoluca, El Salvador, on Oct. 12, 2017. (Photo: Jose Cabezas/Reuters /Newscom)

In a recent poll, residents of El Salvador were asked, “Who runs your country?” Forty-two percent reported gangs, while only 12 percent said the government.

These results reveal a huge problem for El Salvador: The public’s lack of trust in its government threatens to dismantle the country’s democracy and stability.

MS-13 is a dominant force in Salvadoran affairs. Outside the U.S., MS-13’s largest presence is in Central America, particularly in the northern triangle countries of El Salvador, Guatemala, and Honduras.

MS-13 has become a powerful force, capable of coercing weak Central American governments. For example, in 2012, the Salvadoran government was forced to sign a truce with MS-13 in an effort to reduce skyrocketing homicide rates. Although the truce did reduce homicides, the agreement was widely unpopular. Extortion and associated criminal activity continued at high rates with almost no resistance from the government.

When current President Salvador Sánchez Cerén reversed the 2012 truce and implemented a “mano dura,” or iron-first policy, against MS-13 in 2014, the gang retaliated by dumping bodies on the streets. The homicide rate skyrocketed and in 2015, El Salvador had the highest homicide rate in the world.

MS-13 largely relies on extortion as its largest source of income, but has also been known to engage in drug and human trafficking, money laundering, kidnapping, and theft. MS-13’s growing influence in El Salvador has led to changes in its behavior.

The country’s weak state capacity and inability to deliver social services has paved the way for criminal organizations to step in and assume state functions.

This change in behavior has undermined the Salvadoran government’s authority. Fragile States Index tracked the public’s perception of the state’s legitimacy. El Salvador saw its sharpest decline in 2015, and perceived authority has continued to plummet ever since.

In The Heritage Foundation’s Index of Economic Freedom, El Salvador’s government integrity score plummeted from 39 percent in 2016 to 25.2 percent in 2018—a clear indication of a serious problem.

Improving the situation will require long-term efforts from the Salvadoran government. Much of the work will be up to the next administration that will take office in 2019. It will be left to vigorously combat the expansion of MS-13 and preserve the government’s legitimacy.

Failure to step up, create economic opportunities, and increase security efforts could collapse what remains of the Salvadoran government’s authority.