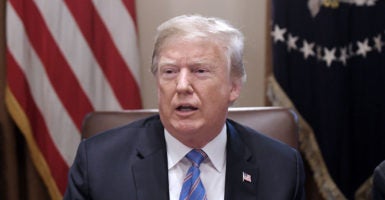 A panel of the 5th U.S. Circuit Court of Appeals issued a ruling making it easier for President Donald Trump to exert influence on the agency. (Photo: Olivier Douliery - Pool via CNP/Newscom)

President Donald Trump will soon be able to use his famous catch phrase against the head of a troubled federal agency, the Federal Housing Finance Agency, which is led by a single Obama appointee with no meaningful oversight from the president.

The 5th U.S. Circuit Court of Appeals ruled this week that the agency’s structure is unconstitutional.

In Collins v. Mnuchin, a three-judge panel of the 5th Circuit issued a per curiam opinion holding that Congress unconstitutionally “insulated the [Federal Housing Finance Agency] to the point where the executive branch cannot control the [agency] or hold it accountable.”

The judges sent the case back to the district court, ordering it to strike down a statutory limit (in 12 U.S.C. § 4512(b)(2)) on the president’s power to remove the agency’s director.

This is an important decision for our government’s separation of powers and for keeping the executive branch agencies accountable to the president.

In the wake of the housing market collapse, Congress created the Federal Housing Finance Agency as part of the Housing and Economic Recovery Act of 2008, hoping it would rehabilitate two government-sponsored entities that had become insolvent: the Federal National Mortgage Association and the Federal Home Loan Mortgage Corporation, more commonly known as Fannie Mae and Freddie Mac.

Congress designed the Federal Housing Finance Agency to be a politically independent entity empowered to create and enforce rules, while also overseeing operations at Fannie Mae and Freddie Mac and nursing them back to financial health.

But Congress also adopted some specific provisions that made the agency partisan and unaccountable to the president—unconstitutionally so, according to the 5th Circuit’s opinion.

Specifically, Congress authorized the president to appoint a single agency director for a five-year term who picks three deputy directors, and who would be removable by the president only “for cause.”

The Federal Housing Finance Agency does not get its money through the normal appropriations process, as other agencies typically do. Instead, it receives its operating expenses through an annual assessment of its “regulated entities.”

Moreover, its director takes only advice, not orders, from the president and two of his Cabinet members who sit on an advisory board—the secretary of the treasury and the secretary of housing and urban development.

All of this leaves the director too independent from executive oversight.

Under the Federal Housing Finance Agency’s care, Fannie Mae and Freddie Mac reached “sustainable profitability” as early as May 2012 and were required to begin gradually repaying the government bailout they had received to the Treasury Department.

But soon after they showed profits, the Treasury Department demanded they pay 100 percent of their profits, in perpetuity.

Fannie Mae and Freddie Mac may have government charters, but they also have private shareholders, and several of them sued the Federal Housing Finance Agency, its director, the Treasury Department, and its secretary, claiming that the government caused them financial harm by taking (literally) all of the value of their shares.

The plaintiffs argued that the structure of the Federal Housing Finance Agency “undermines the separation of powers” because “the executive branch cannot adequately control the agency,” and challenged “the cumulative effect of Congress’s agency-design decisions.”

The court agreed, concluding that even if it rectified the government’s so-called “net worth sweep,” the agency could not properly regulate the plaintiffs or any other entity because it is “an unconstitutionally constituted body.”

Congress vs. the President

In its decision, the court noted that the Supreme Court has “not hesitated” to strike down laws that amass too much power in any one branch of government, or undermine their “authority and independence.” And Congress’ design of the Federal Housing Finance Agency pitted the “powers and obligations” of Congress against those of the president.

Congress may establish agencies under the necessary and proper clause of the Constitution, and it has done so with gusto. As the court noted, “dozens of independent agencies responsible for performing executive, regulatory, and quasi-judicial functions … wield[] vast power and touch[] almost every aspect of daily life.”

The Supreme Court has long allowed Congress to create agencies that are somewhat independent from the president, ostensibly so that they can create beneficial policies sheltered from the changing winds of politics. The president cannot clean out the Augean stables of the federal bureaucracy by firing agency officials, for example, if those officials cannot be removed at will and can only be removed “for cause.”

But the president does have a constitutional duty to “take Care that the Laws be faithfully executed,” and he is responsible for overseeing subordinate executive officers who fill up those Augean stables.

Thus, as the Supreme Court wrote in 2010, the Constitution is “understood to empower the president to keep these officers accountable—by removing them from office, if necessary.”

In this case, the court found that Congress insulated the Federal Housing Finance Agency too much from “meaningful executive oversight,” to the point that the president “could not fulfill his Article II responsibility to ensure the faithful execution of the nation’s laws, thus undermining the separation of powers.”

While the government defended the agency’s constitutionality by relying on a long list of independent agencies that have withstood constitutional challenges before—including the Consumer Financial Protection Bureau, the Federal Trade Commission, and the Office of the Independent Counsel—the court found the Federal Housing Finance Agency’s “unique constellation of insulating features offends the Constitution’s separation of powers”

At the 5th Circuit’s direction, the district court will now have to strike the provision of the Housing and Economic Recovery Act of 2008 that limits the president’s power to fire the Federal Housing Finance Agency director, thus “restoring executive branch oversight to the [agency].”

As a result, the president will soon be able to tell the agency’s director, “You’re fired.”