‘Deep Fake’ Technology Is a Threat to National Security, Politics, and the Media, Marco Rubio Says 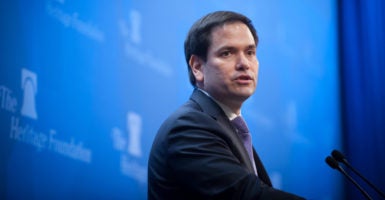 “Today, you just need access to our internet system, to our banking system, to our electrical grid and infrastructure, and increasingly, all you need is the ability to produce a very realistic fake video that could undermine our elections, that could throw our country into tremendous crisis internally and weaken us deeply,” Sen. Marco Rubio, R-Fla., says. (Photo: Steven E. Purcell for The Heritage Foundation)

Sen. Marco Rubio says so-called “deep fakes”—the ability to use artificial intelligence video tools to swap a person’s face on another person’s body, with little indication of manipulation—is a threat to national security.

“One of the ironies of the 21st century is that technology has made it cheaper than ever to do that … . In the old days, if you wanted to threaten the United States, you needed 10 aircraft carriers, and nuclear weapons, and long-range missiles,” the Florida Republican said in a speech Thursday at The Heritage Foundation about the danger of deep fakes, the ability to manipulate audio and video of real people to have them do or say things they never said or did.

“Today, you just need access to our internet system, to our banking system, to our electrical grid and infrastructure, and increasingly, all you need is the ability to produce a very realistic fake video that could undermine our elections, that could throw our country into tremendous crisis internally and weaken us deeply,” Rubio said.

The New York Times reported that “a community of hobbyists has begun experimenting with more powerful tools, including FakeApp—a program that was built by an anonymous developer using open-source software written by Google.”

Rubio said that deep fakes, while a threat to the U.S. as a whole, pose a particular threat to the American political system and the media.

“The vast majority of people watching that image on television are going to believe it, and if that happens two days before an election, or a night before an election, it could influence the outcome of your race,” he said. “The capability to do that exists now, and a culture that would perpetuate and instinctively believe that stuff exists now, because the nature of our political coverage today is driven by conflict.”

The Florida senator, who was a contender in the 2016 Republican presidential primaries, said it is likely that nations that want to do the U.S. harm could use the deep fake technology to destabilize the U.S.

In remarks to reporters Tuesday at the White House, the Associated Press reported, President Donald Trump said he accepts the findings of his intelligence officials on Russia’s meddling during the 2016 election, walking back a comment he made Monday during his press conference with Russian President Vladimir Putin in Helsinki.

At the press conference, Trump appeared to fault both sides.

Rubio says he’s certain Russia played a role in interfering with the 2016 election, and said that America must be ready for similar and even increasing interference in the future.

I know for a fact that the Russian Federation at the command of Vladimir Putin tried to sow instability and chaos in American politics in 2016; not necessarily, as some might report, for purposes of electing one candidate over another, but the primary goal was to ensure that the next president of the United States, whoever won, would be facing a cloud of controversy for weeks and years to come in order to weaken them and to weaken us.

While Rubio said he does not have all the answers to address this newest threat to America’s security, he said the country must always remain on the offensive.

“I know awareness is part of it. I know educating people, including producers and editors, but also political figures and others, about this capacity, is important,” he said of the deep fake threat. “I know that one of the answers is just that this threat exists and from it, we can talk about how we can balance the right to privacy, free speech, and all the other things that come with our constitutional protections, with our obligation to protect our country … our Constitution, and our republic.”