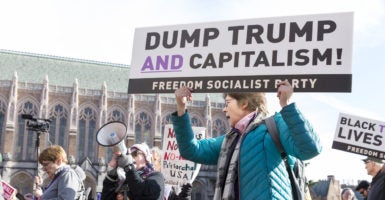 Left-wing student groups at the University of Oregon receive over 160 times more money than conservative groups, a new study reveals.

Funds distributed by the student government of the University of Oregon to campus groups come partially from mandatory student fees paid by the students, The College Fix reported.

“Student groups are allocated money through the incidental fee paid for by students depending on the size of the group and past spending history,” UO’s student government told The Fix, adding:

For example, new groups are typically allocated a smaller amount than established groups, and if they demonstrate spending of 90 percent or above of their budget, they can request more funds the next fiscal year. Group are also funded by other sources on campus, like through departments, fundraising, donations, etc.

Only “cultural” student groups obtained more funding, drawing $369,107 from student government. But some of these cultural groups were organizations such as the Black Student Alliance and the Multicultural Law Students Association, whose campus activism typically assumes a left-leaning approach.

“The most frustrating organization on this campus is [the student government],” UO College Republicans member McKenna Sjoden told Daily Emerald, a school paper. “Their bias towards left-leaning groups does not go unnoticed, and obtaining funds for anything is impossible for [conservative] groups like College Republicans and Turning Point USA.”

The proportion of the University of Oregon’s student government spending on liberal vs. conservative groups resembles the ratio spent by Ivy League schools on President Donald Trump’s campaign vs. Hillary Clinton’s presidential run. Harvard, Yale, and others donated over $2.6 million to Clinton, nearly 172 times the $15,190 they gave to Trump.

The University of Oregon did not respond immediately to a request for comment.