Democrat Senator Worries His Party Is Going Too Far Left 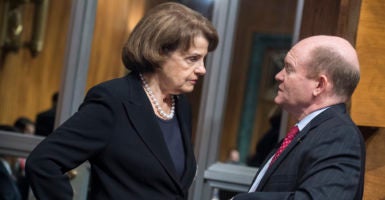 Sen. Chris Coons, D-Del., is worried his party is alienating moderate voters by moving too far to the left.

“If we as a Democratic Party are going to move from a minority at every level that is dedicated to resistance, to a majority that is capable of governing, we have got to move from grievance to optimism,” Coons said in a speech on Thursday, according to U.S. News and World Report.

“And we’ve got to abandon a politics of anxiety that is characterized by wild-eyed proposals and instead deliver ideas and practical solutions.”

Coons also warned that the growing Democratic push to abolish Immigration and Customs and Enforcement, which enforces the nation’s immigration laws, is counterproductive.

“Abolish ICE is too easily mocked as open borders and no law enforcement,” the senator warned.

“Forty percent of voters self-identify as pragmatic or moderate. We cannot abandon them,” he added.

Coons’ caution comes as the far-left Democratic base is pressuring the party’s leaders to endorse a radical immigration agenda.