What’s Next for US-Russia Relationship 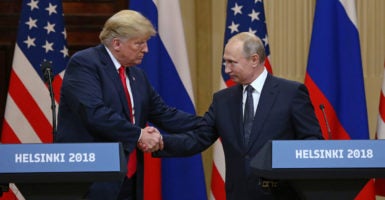 This is a transcript of an interview on the July 16 episode of The Daily Signal podcast. It was edited for length, style, and clarity.

Katrina Trinko: Joining us today is Peter Brookes, senior fellow for national security affairs at The Heritage Foundation. Peter, there’s been a lot of outrage from both the left and the right about President Trump’s comments during his press conference with Russian leader Vladimir Putin today. What was your take on the press conference and what President Trump said and didn’t say?

Peter Brookes: First of all, I think it’s important to realize that the Russian situation was handed to President Trump. It was a long time coming in terms of the geopolitical situation with Russia from the Obama administration, for instance, and their reset policy. So this is a very difficult situation for the United States internationally, like North Korea in many ways. This is a heavy lift to try to fix this.

This was just the first meeting on what I would say is probably going to be a long journey like North Korea. I don’t want to make it exactly like North Korea, but it’s similar. It’s a heavy lift. Very, very difficult problems that are involved in this and a lot of them have been entrenched. Putin’s been in power for 18 years … and we have a situation that is extremely, extremely difficult.

I think we have to be careful about a rush to judgment. We all watched the press conference, we’ve all been kind of breathless since then trying to figure out with this means.

We don’t know what was said privately. We’re talking about this a few hours after the press conference … and the president has done some interviews since the press conference that we’ll probably be hearing about, and he’s making his way back to the United States right now, and the administration will have opportunity to tell us more.

I don’t know what happened between him and Putin, what was said. How forceful was the president about election meddling? How forceful was he about Crimea? Ukraine? Syria? A whole list of issues. Arms control violations on the part of the Russians. So I want to learn more.

We’re at that point I think right now, and the big question is, where do we go from here? I think both sides are going to be evaluating. … I think a lot of the work is going to be turned over to the staffs. Whether it’s the Cabinet secretary who is a staff member, whether it’s [Secretary of State] Mike Pompeo or [Defense Secretary] Jim Mattis at defense and working groups …

I think we’re going to need to know a lot more before we make a final judgment on the success of this summit, but once again, it’s historic. The president—his diplomacy is bold, there’s no question about that. He talked about engagement and dialogue, those are both important issues.

So like I said, I think this is just the first step on a long journey for the United States and Russia and we don’t know where it’s going to lead.

Daniel Davis: What are some of those biggest problems in our relationship with Russia that the president needs to address and try to resolve?

Certainly with elections coming up, Russian cyber meddling is critical and I hope the president said, “Don’t do that again.” We’re obviously watching it, we’re taking steps to prevent this from happening again, we’re much more aware than we were in the past, but we have a big set of elections coming up in the fall, so that’s critically important.

Everybody’s going to have their own priorities. but I would say probably the top … [would include] cyber meddling. Syria’s critically important in the sense of Iran—we’re very worried about Iran getting entrenched there. The Russians have a significant amount of influence in Syria, not total influence, but they basically rescued the Bashar al-Assad regime in Syria in 2015 during their military intervention. They’re still there, they’re still doing things there.

They’re helping Assad make progress on the ground along with the Iranians and Hezbollah. Russia has a relationship with Iran as well. Not total control or influence there either, but they have some, so I think Syria’s probably No. 2 [in important issues].

Ukraine, we talk about Crimea. This is an issue, we don’t know what the president said privately about Crimea in their conversations with Putin or in the working lunch … Remember there was really three events, it was private meeting, there was the working lunch with members of his Cabinet on both sides, and then of course there was the press conference, so we didn’t have access to that. So we’re going to need to learn more in the coming days.

Ukraine, there’s two parts to this. One is Crimea, which Russians annexed illegally in 2014, but the other is there’s an ongoing insurgence in Eastern part of the country that the Russians are behind.

This is one of those things that people probably remember. MH17, that passenger plane that was shot down and appears to have been shot down by Russian forces that were supporting the insurgence in eastern Ukraine, so we’re not only seeing deaths on the ground, we’re [seeing] deaths in the air—terrible, unfortunate situation. This is a frozen conflict that’s been going on for quite some time. So this is something that’s very important to us, that instability in that part of Europe and, of course, conflict in the humanitarian costs added to that.

And then I think there’s, and I’m probably going to overlook some, but there’s two other issues, [including] arms control. The Russians are believed to be in violation of the Reagan-era Intermediate-Range Nuclear Forces Treaty, which is known as INF. The Russians have developed missiles that have exceeded the limits placed on ballistic missiles and cruise missiles. … The Russians have violated that.

There was probably talk about Strategic Arms Reduction Treaty that’s going to expire. It will be called New START, which came under the Obama administration. It’s something to talk about. [Of] course the professionalism of Russian forces when they harass our aircraft and/or ships is something to worry about, as somebody who used to fly reconnaissance missions during the Cold War against the Soviets, something of … interest and concern.

So as a young Navy lieutenant I was flying reconnaissance missions against the Soviets at that time, so there’s concern about irresponsible airmanship, these sort of things. A lot of people can get hurt, it can cause a crisis. It’s just wrong. Russian snap elections, their threats to NATO.

The other thing that people don’t talk much about is that the Russians are supporting the Taliban in Afghanistan. This doesn’t get a lot of headlines here, and we’re fighting the Taliban, by the way. So this is something that we should be concerned about. Now, it’s hard to get a sense outside of government exactly what their support is, but my sense is it might be money and weapons and maybe intelligence.

But the Russians have said that, well we’re supporting the Taliban because they’re against ISIS in Afghanistan and they’re natural enemies and we have concerns about ISIS in Russia—as you know in the Caucasus area there’s been issues.

There’s an emirate there, basically a province of ISIS. There’s been al-Qaeda activity there. Russia unfortunately has been afflicted by terrorism in the past, so they do have legitimate concerns about this, but I think it’s also pushing back against the United States because they’re not only fighting us and NATO forces … but they’re fighting the Afghan government as well. And so they’re destabilizing things there.

There’s a tremendous number of issues that we’re dealing with when we talk about Russia. So where do you start? Right? I guess you start with the meeting. The leaders get a chance to meet each other, [and] personal relationships at senior levels count. Especially [with] a country like Russia. I mean, Russia’s not a democracy, so it’s not like there’s going to be a debate on policies. If Putin says this is the way it’s gonna be, that’s the way it’s gonna be. So if the president can have a positive relationship … I think he did the same thing with Kim [Jong Un], he’s trying to do the same thing with Kim of North Korea. Develop a relationship that can help move the dial in advancing and protecting American interests.

Trinko: Well, speaking of things that also don’t really get covered in the headlines, the media covers a lot of President Trump’s rhetoric on Russia, not so much what his administration actually does policy-wise. Could you perhaps sketch what the administration’s approach in policy actions has been toward Russia?

So our policy hasn’t changed, which is a tough policy, I would say it’s the toughest policy we’ve seen in several presidencies in the United States. Certainly tougher than [President Barack] Obama. Does anybody remember Obama’s off-mic moment? When he said, “Hey I’m going to throw away missile defense—after the elections I’ll have more flexibility.”

This conversation was between Obama and [Prime Minister Dmitry] Medvedev where he said after the midterm elections in the United States, I should have more flexibility and I’ll deal with you on missile defense, which meant Obama basically canceled missile defense in Europe that was aimed at the Iranian threat.

So the policy’s very tough, we’ve thrown out a whole bunch of Russian quote-unquote “diplomats,” intelligence officers, we’ve closed some of their facilities. There’s sanctions on, gosh … I’ve lost track on the number of people and entities. The Mueller investigation just indicted 12 intelligence officers the other day.

Recently they indicted a whole host of others that are part of the internet quote-unquote “research agency,” which are the people who were involved in trying to shape public opinion in the United States through using social media …

I think the policy has been much tougher than we saw under the reset policy, which I think went from reset to regret under the Obama administration, so I think we have a tough policy. And so far … there’s been no change to our tough policy towards Russia.

Trinko: OK, well, thank you so much for joining us today, Peter.

Brookes: Thanks for having me.