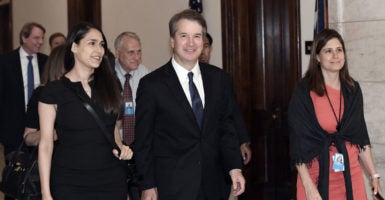 Former female colleagues and employees of federal Judge Brett Kavanaugh are defending him against an attack by a liberal feminist group calling for an investigation of whether he knew about the bad behavior of a former boss.

In the early 1990s, Kavanaugh—now President Donald Trump’s nominee for the Supreme Court seat of retiring Justice Anthony Kennedy—clerked for 9th Circuit Court of Appeals Judge Alex Kozinski. Kozinski retired in December after 15 women, including former clerks and another judge, made sexual harassment allegations against him.

In May 2006, Kozinski spoke in support of Kavanaugh’s Senate confirmation for a judgeship on the U.S. Court of Appeals for the District of Columbia Circuit.

The liberal group UltraViolet demanded that the Senate Judiciary Committee investigate what Kavanaugh might have known about Kozinski more than 25 years ago.

“Judge Kozinski’s office had a long history of being a toxic and dangerous environment for women,” Karin Roland, chief campaigns officer for UltraViolet, said in a statement. “The American public deserves to know what Kavanaugh saw and heard, and if he did witness or hear about any harassment, what he did or could have done to report it.”

Leslie Fahrenkopf Foley, who was a summer extern in Kozinski’s chambers while Kavanaugh served as a law clerk, defended the high court nominee.

“I worked for Alex Kozinski in the summer of 1992, while Brett Kavanaugh was a law clerk. It was a completely professional environment, and I never saw or experienced any harassment, nor did I ever feel uncomfortable,” Fahrenkopf said in a statement released through the White House. “Brett Kavanaugh is, moreover, a consummate gentleman, and I cannot imagine he ever knew about or condoned any workplace misconduct by Judge Kozinski or anyone else.”

The White House sent a letter to the Senate Judiciary Committee signed by 18 of Kavanaugh’s female former clerks attesting to “our uniformly positive experiences with the judge as a boss on issues of gender and equality in the workplace.”

Earlier this week, several female clerks for Kavanaugh advocated for him in interviews with The Daily Signal.

In an op-ed for The Wall Street Journal, Yale Law School professor Amy Chua called Kavanaugh a “mentor to women,” noting that 25 of the 48 clerks who worked in his office have been women, and a quarter of his clerks were members of minority groups.

White House spokeswoman Kerri Kupec called the attack by UltraViolet a shameful “smear” against the nominee.

As predictable as it is shameful, the left-wing partisan smear campaign against a distinguished, lifelong public servant has begun. Everyone who knows Judge Kavanaugh knows he believes all people deserve respect, including at the workplace.

Judge Kavanaugh mentors and supports his law clerks—a majority of whom are women—and has always ensured that all of his employees are treated with respect and dignity.

Judge Kavanaugh clerked for Alex Kozinski more than 25 years ago. Prior to the public reports late last year, Judge Kavanaugh had never heard any allegations of sexual misconduct or sexual harassment by Judge Kozinski.

As the White House pushes back, a Wall Street Journal editorial also critiqued press coverage of what it characterized as an unfair allegation.

“This week’s mud on the wall includes a claim of guilt by association when Mr. Kavanaugh was a law clerk 27 years ago,” The Wall Street Journal editorial says.

The Journal referred to UltraViolet as “sleaze-slingers.”

“They merely have insinuations that in the age of social media can spread around the world before the truth can even get a hearing,” the editorial said. “ … It used to be that the press required at least some evidence to report a story, but now a politically motivated group can write a memo without incriminating facts and get it reported as news.”

Kozinski was nominated to the court by President Ronald Reagan and was confirmed in 1985. Nine of Kozinski’s clerks went on to clerk for U.S. Supreme Court justices—including Kavanaugh, who clerked for Kennedy.

Susan Engel, a law clerk for Kozinski in 2000 and 2001, later clerked for the now-deceased Supreme Court Justice Antonin Scalia. She worked with Kavanaugh at the law firm of Kirkland & Ellis.

“Brett is a devoted father to two daughters, someone who has mentored and supported the careers of many women lawyers, and someone who has always treated women with respect,” Engel said in a statement. “At no time during my clerkship, or in the years since, did I see or hear Judge Kozinski sexually harass anyone.

“I was shocked by the allegations that surfaced last year. I would be astonished if Brett Kavanaugh had ever heard anything about this,” she wrote.

Porter Wilkinson, a clerk for Kavanaugh from 2007 to 2008, said she doesn’t believe Kavanaugh knew of any allegations against Kozinski.

“Judge Kavanaugh knows firsthand from his mother’s personal experience as a trailblazer in the legal world the discrimination that women can face in the workplace,” Wilkinson said in a statement.

“As a former law clerk to Judge Kavanaugh, I know—as evidenced by the letter signed by his law clerks—that he treats everyone with respect. He does not tolerate sexual harassment in any workplace,” she wrote.

At the hearing, Kozinski testified:

But most, virtually all, folks who qualify for a clerkship with a circuit judge these days have those qualities.

But Brett brought something more to the table. He first of all brought what I thought was a breadth of mind and a breadth of vision.

Sometimes, I’d take one position, and he’d take the opposite, and sometimes we’d switch places. He was very good and very flexible that way.

The Washington Post first reported in December on a series of 15 former clerks and other female employees who claimed Kozinski had harassed them.

Among the accusers was now-retired U.S. Court of Federal Claims Judge Christine O.C. Miller, who said he fondled her. Amid the allegations, Kozinski announced his immediate retirement on Dec. 18.