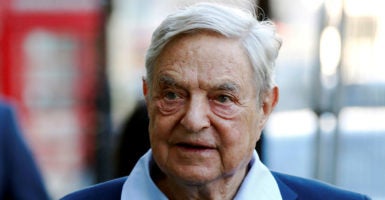 Organizations listed as partners by the "Not One Penny" campaign to kill the tax cuts have ties to business magnate George Soros, pictured arriving June 20, 2016, for a speaking engagement at the Open Russia Club in London. (Photo: Luke MacGregor/Reuters/Newscom)

Left-wing financier George Soros figures prominently in a campaign by progressives to repeal the Trump tax cuts, according to a review of the campaign’s allied organizations and their tax records by The Daily Signal.

The campaign, called “Not One Penny,” first came together almost a year ago with what The Washington Post reported was “a seven-figure ad buy in eight Republican-held congressional districts.”

All of the districts, the Post reported, include “large numbers of white voters without college degrees, who voted for Donald Trump in 2016 but have not historically been passionate about tax cuts.”

The “direct action and activism” of the Not One Penny campaign, the Post reported, closely model the Tax March held April 15, 2017, and successful efforts to block repeal of Obamacare in the Senate.

Several organizations listed as partners by Not One Penny have tangible ties to Soros, the Hungarian-American billionaire and hedge fund manager. Soros is the founder and chairman of Open Society Foundations, an international grant-making institution based in New York City and known for financing progressive political causes.

The Washington-based Capital Research Center, a nonprofit that examines how foundations, charities, and other nonprofits spend money and get involved in politics and advocacy, maintains a detailed profile of Soros, his activities, and the operations of his Open Society Foundations at its “Influence Watch” website.

“Among Not One Penny’s allies are plenty of groups funded by George Soros through his philanthropies,” Matthew Vadum, a senior vice president at Capital Research Center, told The Daily Signal in an email. “Among them are Demos, MoveOn.org, People’s Action (formerly National People’s Action), People for the American Way, Public Citizen, [and] Working Families.”

>>> Related: The Left-Wing Plot to Repeal the Trump Tax Cuts

Vadum described Not One Penny as a project of the Sixteen Thirty Fund, a left-leaning nonprofit that has received funding from labor unions and a Soros-funded organization called the Tides Foundation.

“The Sixteen Thirty Fund has ties to George Soros and paid $400,000 to his ultra-secretive Democracy Alliance group for consulting services, according to its 2016 IRS filings,” Vadum said.

The Tides Foundation is among left-leaning U.S. political organizations receiving “multimillion dollar gifts” from Open Society Foundations, according to the Capital Research Center.

Thomas Watson, spokesman for Open Society Foundations, told The Daily Signal in an email that the international grant-making network is not funding the Not One Penny campaign.

“Open Society has given general support to a number of the organizations you mention, but is not funding this specific campaign,” Watson said.

Trump signed the Tax Cuts and Jobs Act into law three days before Christmas. Beginning this year, the new law cuts the corporate income tax rate from 35 percent to 21 percent and drops the top individual tax rate to 37 percent.

The legislation passed by Congress reduces income tax rates, doubles the standard deduction, and eliminates personal exemptions. Although the corporate tax cuts currently are permanent, the individual changes are set to expire at the end of 2025.

The White House called the tax cuts “the biggest gross tax cuts in American history, cutting over $5.5 trillion in taxes over 10 years.”

But political operatives with the Not One Penny campaign claim the congressional tax reform package signed by Trump benefits only the wealthiest Americans while harming the middle class. They have made this argument since Republican lawmakers first introduced the plan.

Tim Hogan, a spokesman for the campaign, released a statement Nov. 16, shortly after the House passed the tax cuts:

The tax bill that passed the House today is an affront to the people that our leaders in Washington claim to represent. The GOP voted to cut taxes for millionaires, billionaires, and wealthy corporations, inevitably forcing cuts to programs working families depend on like Medicaid, Medicare, public education, and Social Security.

While passing the largest middle-class tax hike in a generation, the GOP said ‘no thanks’ to helping working families this Thanksgiving. The tax proposal that passed today is wildly unpopular with a majority of Americans, and voters won’t forget those who enabled this hypocrisy. Republicans’ vote today is one that will haunt them in the weeks and months ahead.

Most recently, campaign operatives have focused attention on corporate stock buybacks, which they view as harmful to employees. Nicole Gill, the Tax March executive director, issued a statement critical of a recent stock buyback by the Walgreens pharmacy giant.

“We hit a shameful GOP tax law milestone: Wealthy corporations have bought back $500 billion of their own stock, betraying their employees to line the pockets of their CEOs and shareholders,” Gill said. “Despite Republicans’ promises that this law would benefit workers, corporations like Walgreens have used their massive tax savings to make the rich even richer.”

But in reality, the campaign against the tax cuts isn’t operating in the best interests of average Americans, and doesn’t stem from a spontaneous uprising of concerned citizens, Vadum warned.

“Not One Penny is a fake grassroots campaign created to help the government keep more of your money by making you feel guilty about your own personal financial success. You’re greedy and selfish and you don’t deserve to enjoy the fruits of your labor, according to the group,” Vadum told The Daily Signal, adding:

Not One Penny would prefer that your tax dollars be redistributed from worthy programs like national security and immigration enforcement and be used instead on Obamaphones and free college tuition for illegal aliens.

Its hateful class warfare agenda is dressed up in bilious nonsense about income inequality, a made-up issue patriotic Americans don’t care about. Not One Penny wants to repeal the hugely economically stimulating tax cuts that President Trump got through Congress and is fine with sabotaging the economy in order to pursue its twisted so-called social justice objectives.

The Daily Signal repeatedly called and emailed the Sixteen Thirty Fund seeking comment for this article, but has not received a response.

The Daily Signal also emailed the Not One Penny campaign, asking for comment on its policy stance and relationship with Soros-backed organizations. The campaign has not responded.

James Pinkerton, a policy veteran in the administrations of Presidents Ronald Reagan and George H.W. Bush, helped lead a coalition supporting passage of  the Tax Cuts and Jobs Act. In a phone interview with The Daily Signal, Pinkerton said the Not One Penny campaign could complicate the election strategy of “more moderate, establishment Democrats” who are ambitious to take back the House in November.

“There’s always a tension between ideologues and moderates,” Pinkerton said. “But it’s especially acute this time around with the Democrats.”

The “progressive, ideological base” of the Democratic Party is the motivating factor behind the anti-tax cut campaign, he said.

“Institutional Democrats are in a quandary because the base is demanding an absolute rejection of Trump,” Pinkerton told The Daily Signal, adding:

This puts institutional Democrats, the more moderate, establishment types, in a difficult spot because they have to be careful about trying to destroy something that seems to be working. We are looking at a bit of a replay of the 2016 primary race between Hillary Clinton and Bernie Sanders.

Since the tax cuts went into effect, the U.S. economy has grown at a steady clip and unemployment has fallen.

Trump has talked about a second round of tax cuts to further reduce the corporate tax and provide more relief to middle-class Americans.

“Self-described moderate Democrats do not want to be associated with the absolute hatred of Trump, like the kind that Robert De Niro showed at the Tony Awards,” Pinkerton said. “But the ideological base is devoted to the hatred of Trump, and that makes it difficult for Democrats who are actually on the ballot.”

Citing the late Massachusetts Democrat and former House speaker, he added: “Tip O’Neill may have been right that all politics is local and you win district by district, but ideology tends to be national.”

Kevin Mooney has contributed several reports to publications of the Capital Research Center, whose work is cited in this article.