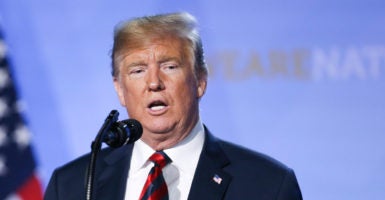 President Donald Trump speaks during a press conference on the second day of the NATO summit in Brussels, Belgium, July 12, 2018. (Photo: Xinhua/Sipa USA/Newscom)

KYIV, Ukraine—This week in Brussels, U.S. President Donald Trump pushed for NATO members to both boost their military spending and reduce their spending on Russian gas.

Trump’s blunt message may have fallen flat among the leadership of some NATO allies, as well as the Western press corps. Yet, it was likely to resonate in Ukraine, where Russia continues to wage a 4-year-old war that has, so far, killed more than 10,300 Ukrainians and displaced about 1.7 million people from their homes.

At a breakfast with NATO Secretary-General Jens Stoltenberg on Wednesday, Trump accused Germany of being beholden to Moscow because of its reliance on Russian natural gas imports.

Above all, Trump pointedly criticized Germany for its support for a controversial project, the Nord Stream 2 gas pipeline under the Baltic Sea.

“Well, I have to say, I think it’s very sad when Germany makes a massive oil and gas deal with Russia, where you’re supposed to be guarding against Russia, and Germany goes out and pays billions and billions of dollars a year to Russia,” Trump said.

Trump’s remarks may have caused a stir in Brussels, but what he said echoed a common refrain from Ukrainian leaders. For Kyiv, blocking Russia’s planned pipelines is a diplomatic priority.

In a May editorial for the German Frankfurter Allgemeine Zeitung newspaper, Ukrainian President Petro Poroshenko wrote that Nord Stream 2 “is aimed, first and foremost, at the destruction of the unity of Europe and, subsequently, its subordination.”

“This has always been the ideology of the Russian energy policy,” Poroshenko wrote. “Today there are no grounds to think differently, until Russian aggression against Ukraine and the West is not actually stopped, and the Kremlin begins to respect international law and order.”

Ukraine sent a delegation to this week’s NATO summit in Brussels. According to news reports, Trump met with Poroshenko for 20 minutes Thursday.

Ukraine is not a member of NATO, although it would like to be. And for good reason, too.

On average, one Ukrainian soldier dies in combat every three days. And civilians still frequently die because of the war, too.

“The ongoing armed conflict in eastern Ukraine, instigated and perpetuated by Russia, remains a major challenge to Euro-Atlantic security, and has produced a humanitarian catastrophe in the Donbas,” Petr Pavel, chairman of the NATO Military Committee, said in a statement emailed to journalists Thursday. 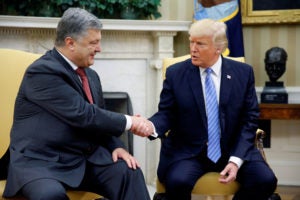 The hard truth, however, is that with an active war ongoing within Ukraine’s sovereign territory, there is little chance that NATO will take steps to bring the post-Soviet country into the alliance’s fold.

In fact, many security experts see Russia’s more than 4-year-old proxy war in eastern Ukraine as a gambit by Moscow to sabotage any near-term ambitions of Ukraine to join the Western alliance.

Still, Ukraine’s national security positions are in line with Trump’s, and particularly when it comes to military spending.

Trump has adamantly pressed NATO countries to meet the alliance’s defense spending benchmark of 2 percent of gross domestic product. At the NATO summit Wednesday, the U.S. president sparked headlines when he floated a proposal to up NATO’s military spending benchmark to 4 percent of GDP at a later date.

Many analysts scoffed at the proposal, denouncing it as unrealistic.

For its part, however, Ukraine’s planned 2018 defense budget of $6.1 billion represents roughly 6 percent of its GDP—far surpassing the equivalent defense spending of any NATO country, the U.S. included.

Currently, U.S. defense spending represents roughly 3.57 percent of GDP, according to a NATO report. Among 29 NATO countries, only eight are expected to meet the 2 percent benchmark in 2018.

That is not a perception shared by other NATO members such as Germany and France, for which terrorism is a more pressing security concern.

Consequently, the Baltic countries—Estonia, Latvia, and Lithuania—are now among the most rapidly militarizing on earth.

To reassure its eastern members, NATO is rotating military forces across Eastern Europe. The Western alliance has also increased the number and frequency of its exercises in the region.

Poland, which shares a border with Ukraine, is also building up its military. Poland launched an ambitious, 10-year defense project in 2015 aimed at upgrading its military forces and doubling its ranks to 150,000 soldiers. Poland raised its military expenditures by 13 percent between 2013 and 2014.

Russia’s proxy war has galvanized Ukrainian public opinion against Russia. Kyiv has named Russia as the “aggressor nation,” and has specifically rebuilt its military to defend against a Russian invasion from the east. Kyiv has also revamped its military industrial complex, climbing the ranks among the world’s top arms exporters.

Four years ago, Ukraine had a defunct military, crippled after decades of corruption under successive pro-Russian governments in Kyiv. Today, the country fields a military force with about 250,000 active-duty soldiers and a reserve corps of 80,000.

In terms of manpower alone, among European countries only Russia has more soldiers than Ukraine.

Due to Russia’s 2014 invasion and the ongoing Russian threat, Ukraine’s current Defense Doctrine requires at least 5 percent of annual GDP be spent on security and defense.

Since the breakup of the Soviet Union in 1991, Russia has often leveraged its power over Ukraine through the energy economy. In particular, by cutting off gas supplies in winter.

This winter was no exception.

Amid a late-season cold snap, Russia cut off its gas supplies to Ukraine. The move immediately sent Ukraine into a nationwide heating crisis.

Russia’s latest gas cutoff was, in part, a gambit to diminish Ukraine’s reputation as a reliable gas transit partner for Europe, thereby strengthening the argument that the proposed Nord Stream 2 pipeline under the Baltic Sea—which bypasses Ukraine—is vital for Europe’s energy security.

Russia’s hardball gas politics against Ukraine have, in the past, spurred crises throughout Europe. In January 2009, for example, Russia cut its gas exports to Europe through Ukraine, plunging the Continent into an energy crisis almost overnight.

Russian President Vladimir Putin, who was his nation’s prime minister at the time, ordered Russian energy company Gazprom to cut its exports through Ukrainian pipelines by about three-fifths. The move came amid one of the lowest recorded winter temperatures in London in a century, sparking fears of a sharp increase in oil and gas prices. 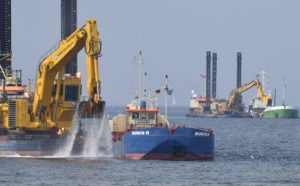 Excavators work on a discharge channel of the new Nord Stream 2 Baltic Sea pipeline in the Bay of Greifswald, May 15, 2018. (Photo: Stefan Sauer/dpa/picture-alliance/Newscom)

Brussels had pledged to cut the EU’s reliance on Gazprom gas when Russia’s military aggression against Ukraine began in 2014.

Yet, the EU’s Russian gas imports have actually increased by 25 percent since 2014, and there’s little sign the bloc is set to wean itself off Russian gas anytime soon. Gazprom’s share of the European gas market will rise to 40 percent by 2035, industry reports forecast.

About 37 percent of Germany’s gas purchases currently come from Russia, according to industry data. And that number could soon double if Russia gets its way.

But Germany isn’t the only NATO member mulling a new Russian gas pipeline that would sidestep Ukraine. Another planned Russian pipeline project, known as TurkStream, would bypass Ukraine through Turkey, a NATO member.

“So we protect you against Russia,” the president said, “but they’re paying billions of dollars to Russia, and I think that’s very inappropriate.”

U.S. and EU sanctions on Russia for its aggression in Ukraine  so far have hampered financing for the Nord Stream 2 project, which is now a wholly owned subsidiary of Gazprom.

In January, however, Germany green-lighted the construction of Nord Stream 2 through German waters, as well as its landfall in German territory.

German Chancellor Angela Merkel has assured Kyiv that Nord Stream 2 would not end the need for Ukraine’s gas transit pipelines. Kyiv, however, remains staunchly opposed to the new Russian pipeline.

In separate statements, Trump and Poroshenko both criticized Germany’s plan to entrench its energy dependence on Russia through Nord Stream 2.

“It is certainly a geopolitical project aimed to weaken Ukraine—to do everything to leave Ukraine without profits from the existing gas transport system,” said Poroshenko, Ukraine’s president, about Nord Stream 2 during a joint press conference Tuesday with EU leaders.

Speaking of Germany and other NATO members with Russian gas deals, during his Wednesday breakfast with NATO’s Stoltenberg, Trump said: “I don’t know what you can do about it now, but it certainly doesn’t seem to make sense that they paid billions of dollars to Russia and now we have to defend them against Russia.”