Before Judging Trump, NATO Allies Should Do Some Soul-Searching 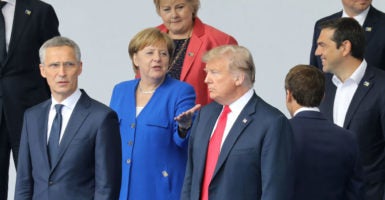 President Donald Trump has no doubt caused a stir in Europe this week.

Among other things, he has said Germany is a “captive” to Russia due to its recent oil and gas deals, and that he expects NATO countries to “immediately” increase defense spending to relieve some of the unfair burden on the U.S.

I get why some European allies and American NATO supporters are worried about the rhetoric. But when they panic over whether “Trump can be trusted,” have they ever asked whether they themselves have earned the trust of Trump and the American people?

After all, how many times have Europeans broken the promise to increase defense spending? The reality is, most NATO allies are free riders on American defense. And in spite of that, some NATO countries (like Germany) harbor deep anti-American attitudes, not just anti-Trump attitudes.

And for all the angst over Trump’s statements about the Nord Stream 2 pipeline, which makes Germany more dependent on Russian natural gas, Trump’s criticism is valid. Germany and some European allies do try to play the Russia card both ways.

Not only does Germany benefit economically from Russian energy deals, it and other Europeans didn’t panic when President Barack Obama began appeasing the Russians. To the contrary, there was a time when Germany was reluctant to impose sanctions on Russia.

Germany seems completely blind to the political double standard, which frankly raises an obvious question: Might not all this outrage be posturing for domestic consumption?

It’s no accident that anti-Americanism exists on the far right and far left in Germany and France. That age-old political disease is extremely convenient and increasingly part of these countries’ national identities. It is instinctive and emotional and now part of their political cultures.

It also helps explain, notwithstanding Trump’s unconventional rhetoric, why he is so deeply unpopular in Europe. We should never forget that President George W. Bush, who everyone agrees was a perfect gentleman, careful with his words and a moderate Republican to boot, was equally hated in Europe during his time as president.

Instead of trying to see the full picture of what the U.S. is trying to achieve—a stronger NATO with more forces, endorsement of NATO statements on Crimea, and increasing defense spending—these European critics are fanning the flames and making the divide between America and Europe even worse.

So forgive me for being skeptical of their outrage. It would be more believable if they were not so one-sided in their assessments of U.S. policy, if they were more interested in preserving NATO’s unity than bashing Trump. They frankly appear to be self-serving, using their supposed outrage over Trump as an excuse to shirk their promised commitments.