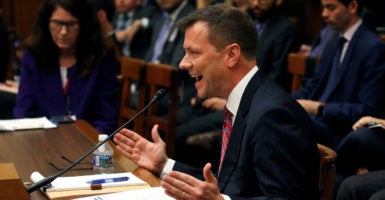 A joint hearing of two House committees Thursday repeatedly turned testy as FBI agent Peter Strzok sought to explain away text messages sharply critical of Donald Trump and how they did not affect the fairness of the FBI investigation of Russian interference in the 2016 presidential election.

Strzok, reassigned but still an FBI employee, admitted “it’s fair to say I’m not a fan” of Trump. But he insisted that the Russia investigation is legitimate, contrary to Trump’s characterization of it.

“In the summer of 2016, we had an urgent need to protect the integrity of an American presidential election from a hostile foreign power determined to weaken and divide the United States of America,” Strzok told lawmakers. “This investigation is not politically motivated. It is not a witch hunt. It is not a hoax.”

The House Oversight and Government Reform Committee and the House Judiciary Committee held the joint hearing. The following are the big takeaways.

Throughout the hearing, Strzok continuously denied being biased.

“Having worked in national security for two decades and proudly served in the U.S. Army, those opinions were expressed out of deep patriotism and an unyielding belief in our great American democracy,” he said.

“At times, my criticism was blunt, but despite how it’s been characterized, it was not limited to one person or to one party. I criticized various countries and politicians, including Secretary [of State Hillary] Clinton, Sen. [Bernie] Sanders, then-candidate Trump, and others,” he continued.

“Let me be clear, unequivocally and under oath: Not once in my 26 years of defending my nation did my personal opinions impact any official action I took,” Strzok said.

“The moment special counsel Bob Mueller found out about Peter Strzok’s text and emails, he kicked him off of the investigation,” Gowdy said. “But that was a year and a half too late. The texts and emails may have been discovered in May of 2017, but the bias existed and was manifest a year and a half before that. All the way back to late 2015 and early 2016.

“So it wasn’t the discovery of texts that got him fired, it was the bias manifest in those texts that made him unfit to objectively and dispassionately investigate,” he said.

At another point, Gowdy said:

Agent Strzok may not see it, but the rest of the country does, and it is not what we want, expect, or deserve from any law enforcement officer, much less the FBI.

Strzok said, “I do sincerely regret that,” referring to the text messages.

2. What Strzok Says He Meant by ‘Stop’ Trump

The Justice Department inspector general’s report revealed an exchange of texts between Strzok and Lisa Page, an FBI lawyer with whom he had an affair.

Page asked regarding Trump, “He’s not ever going to become president, right? Right?!”

Strzok told members of Congress on Thursday he doesn’t remember sending the message, but said it was “in shorthand,” in response to what he called “horrible, disgusting behavior” by Trump during the campaign regarding what Trump said about a Gold Star family that spoke at the Democratic National Convention. Strzok suggested that “we’ll” meant the American people.

Strzok went on to mock the notion that he or anyone else at the FBI would work to thwart Trump’s election.

“At every step, at every investigative decision, there were multiple layers of people above me—assistant director, deputy director of the FBI—and multiple layers of people below me—section chiefs, unit chiefs, and analysts—all of whom were involved in all of these decisions,” Strzok said. “They would not tolerate any improper behavior in me any more than I would tolerate it in them.

“The suggestion that I, in some dark chamber in the FBI, would somehow cast aside all of these procedures, all of these safeguards, and do this is astounding to me,” he said. “It couldn’t happen.”

At that point, Democrats on the joint committee applauded.

3. What Strzok Says He Really Meant by Impeachment

Gowdy asked Strzok about why he used the word “impeachment” in text messages concerning Trump and the Russia investigation without recalling how many interviews he conducted in the probe by that point.

“When you are prejudging not just a result, but a punishment, which is what impeachment is, you are prejudging the conviction and the sentencing when you have not conducted a single, solitary interview,” Gowdy said. “That is letting your bias impact your professional judgment.”

Strzok said, “I never prejudged anything. Not in this case. Not in any others.”

Strzok then tried to explain what he meant.

“At the time, I was deputy assistant director. I had section chiefs, unit chiefs, supervisors, people who typically do interviews. Not me. If something is high-level, and I am involved, it would be rare, if ever, that I would get out there and conduct interviews, first of all,” he said.

“Second, you mentioned the word ‘impeachment.’ That was used in the context of my not knowing what this would lead to. I was not prejudging impeachment. When I used that term, I was saying it might lead all the way to something.”

Strzok went on to accuse the committee’s investigation of him as aiding the Russian government of Vladimir Putin.

“I understand we are living in a political era, in which insults and insinuation often drown out honesty and integrity,” Strzok said. “But the honest truth is that Russian interference in our elections constitutes a grave attack on our democracy. Most disturbingly, it has been wildly successful—sowing discord in our nation and shaking faith in our institutions.”

“I have the utmost respect for Congress’ oversight role, but I truly believe that today’s hearing is just another victory notch in Putin’s belt and another milestone in our enemy’s campaign to tear America apart,” Strzok continued. “As someone who loves this country and cherishes its ideals, it is profoundly painful to watch and even worse to play a part in.”

Strzok said he is among the few who knew details of Russian election interference and could have harmed Trump’s chances of winning the election, but insisted he did not.

“In the summer of 2016, I was one of a handful of people who knew the details of Russian election interference and its possible connections with members of the Trump campaign,” Strzok said. “This information had the potential to derail, and quite possibly, defeat Mr. Trump. But the thought of expressing that, or exposing that information, never crossed my mind.”

Early in the hearing, Strzok did not answer a question about how many witnesses he interviewed in the investigation into Russian meddling in the 2016 election.

House Judiciary Committee Chairman Bob Goodlatte, R-Va., reminded Strzok that he was “under subpoena and required to answer the question.”

“Your testimony is essential to this hearing and to our oversight and information-gathering functions with regard to the actions taken and decisions made by the Department of Justice and the FBI in 2016 and 2017. I am specifically directing you to answer the question in response to our subpoena,” Goodlatte said. “In a moment, we will continue with the hearing, but based on your refusal to answer the question, at the conclusion of the day, we will be recessing the hearing, and you will subject to recall to allow the committee to consider a contempt citation.”

Strzok continued to confer with FBI counsel, rather than his own lawyer.

Rep. Jerrold Nadler, D-N.Y., the ranking member of the House Judiciary Committee, interjected that Strzok “can consult with the FBI counsel. He’s an FBI employee” and asserted “the chairman is not being proper.”

During a recess, the FBI informed committee members that Strzok could answer the question. At that point, Strzok told the committee he couldn’t remember.

6. What Strzok Says He Meant About How Trump Voters ‘Smell’

One of Strzok’s texts from Aug. 26, 2016, said of Trump supporters: “Just went to a southern Virginia Walmart. I could SMELL the Trump support.”

“I clearly wasn’t smelling one thing or the other. What I meant by that was, living in Northern Virginia, having traveled 100, 150 miles south within the same state, I was struck by the extraordinary difference in the expression of political opinion and belief amongst the community there and from where I live.”

7. Goodlatte: How Would You Feel?

Goodlatte appealed to Democrats on the two committees who consistently defended Strzok. He said the question of Strzok’s potential bias “goes to the very heart of our system of justice, one that is supposed to be fair and treat everyone equally under the law.”

“To my colleagues on the other side of the aisle, please replace President Trump’s name with your own name in a small sample of things Mr. Strzok has said,” Goodlatte said. “Envision how you would feel if you found out that the chief agent investigating you as a member of Congress was making these comments: ‘F-Trump,’ ‘Trump is a disaster,’ ‘Just went to a southern Virginia Walmart. I could smell the Trump support’—or, perhaps most alarmingly and revealingly, ‘We’ll stop it’—referring directly to Mr. Trump’s candidacy for president.”

He added what he thought Strzok’s attitude toward the twin investigations of Clinton and Trump suggest.

“Mr. Strzok and others inside the FBI and [Justice Department] turned our system of justice on its head. And that’s why we are here and why it matters,” Goodlatte said early in the hearing. “We don’t want to read text message after text message dripping with bias against one of the two presidential candidates.”