The Role Kavanaugh Played in the Starr Investigation of Clinton 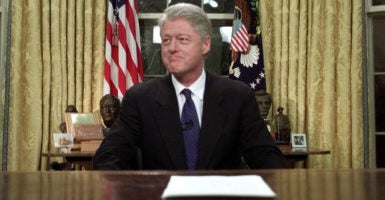 At the age of 33, Brett Kavanaugh wrote most of the portion of the Starr report to Congress that laid out grounds for impeachment against then-President bill Clinton, pictured in 2001. (Photo: Kevin Lamarque/Reuters/Newscom)

Just when it seems the soap opera of the Clinton scandals had faded into a distant memory, it could re-emerge in the coming battle for the Supreme Court.

President Donald Trump’s nominee to serve on the high court, Judge Brett Kavanaugh of the U.S. Court of Appeals for the District of Columbia Circuit, was a young lawyer on the team of independent counsel Kenneth Starr during the probe of President Bill Clinton that led to his eventual impeachment by the House of Representatives for perjury and obstruction of justice in covering up his affair with White House intern Monica Lewinsky.

“That argument was fully vetted and considered by the office,” Robert Bittman, a Washington lawyer who was also on the Starr team investigating Clinton, told The Daily Signal. “The biggest advocate for that was Sam Dash.”

Dash was also the chief counsel for the Senate Watergate Committee in the early 1970s and also worked as an ethics adviser for the Starr team.

Kavanaugh’s time working on the Starr team was a line of attack by Democrats when President George W. Bush nominated him to serve on the appeals court in 2003, a position for which he wasn’t confirmed until 2006.

Bittman, however, doubts it will be an issue during the Supreme Court confirmation fight.

“When Brett was named to the circuit court, all the Democrats had to go after him on was a lack of judicial experience, his experience with Starr and his work with the Bush White House counsel’s office,” Bittman said. “Now, Democrats have 12 years of opinions to go after.”

Further, politically, defending the Clintons is not as big of an issue for Democrats now, Bittman said.

“I would guess Democrats will attack him for it, even though, in my view, it would be unfounded,” Page told The Daily Signal. “Democrats are entitled to bring up whatever issue they wish in vetting. I worked with Brett a good bit of time and know him to be a wonderful person and a wonderful lawyer.”

Page said the Starr team was divided into two camps. One camp was the prosecutors and trial lawyers, of which Page was a part. The other was the “brain trust” and writers. Kavanaugh was part of the latter, Page said.

“He truly listens to understand, not just to reply,” Page said of Kavanaugh. “He seeks first to understand all of the facts, then to be understood.”

“I mean, Brett Kavanaugh made his name by investigating not just the Starr—not just Whitewater, but the Monica Lewinsky part, the sexual details,” Toobin said. “And his, you know, making his name for himself got him on the trajectory that he is today. And Hillary Clinton has to watch yet another Supreme Court nomination that she thought she was going to be able to [make].”

Their op-ed said, in part:

Contrary to Cohen’s table-thumping, the record establishes that Starr was a thorough, fair, ethical, and successful prosecutor. His record is one of extraordinary accomplishment and integrity. And to us, Starr is an American hero.

Over time, fair-minded people will come to hail Starr’s enormous contributions to the country and see the presidentially approved smear campaign against him for what it was: a disgraceful effort to undermine the rule of law, an episode that will forever stand, together with the underlying legal and moral transgressions to which it was connected, as a dark chapter in American presidential history.

The independent counsel’s probe began with the investigation of the collapse of the Madison Guaranty Savings and Loan Association, owned by the McDougal family, who entered into the Whitewater land deal with the Clintons. It expanded into the White House travel office firings, the White House’s questionable obtaining of hundreds of FBI files relating to political opponents, and eventually, the Lewinsky matter.

The op-ed noted convictions in other matters, including that of Arkansas Gov. Jim Guy Tucker for fraud. Further, it said it was U.S. Attorney General Janet Reno who referred other matters to the independent counsel, rather than Starr seeking to investigate other potential crimes.

In hindsight, Kavanaugh later said, it would have been better for the Starr team to stick with one matter—and, if needed, hand off other matters to a new independent counsel.

“It was, in retrospect, probably a mistake for Judge Starr to be assigned additional investigations after the initial Whitewater and Madison investigations,” Kavanaugh said at his May 2006 confirmation hearing for the appellate court judgeship.

“So, he got new jurisdiction over a travel office matter, an FBI files matter, and eventually the Lewinsky matter. I think it would have been better in retrospect for Judge Starr to have handled what he was initially assigned and, if there was a new special counsel needed in these other matters, for new people to be appointed,” Kavanaugh continued. “By adding to the jurisdiction, it created the impression that Judge Starr was somehow the permanent special investigator of the administration.”

As Trump now faces an investigation by special counsel Robert Mueller, many Senate Democrats have taken aim at a 2012 Minnesota Law Review article, in which Kavanaugh argues Congress should pass a law codifying Justice Department opinions that a sitting president should not be indicted.

“This is not something I necessarily thought in the 1980s or 1990s,” he wrote. “Like many Americans at that time, I believed that the president should be required to shoulder the same obligations that we all carry. But in retrospect, that seems a mistake. Looking back to the late 1990s, for example, the nation certainly would have been better off if President Clinton could have focused on Osama bin Laden without being distracted by the Paula Jones sexual harassment case and its criminal investigation offshoots.”

The Supreme Court ruled 9-0 that Clinton must face the Jones civil suit, in which Clinton lied under oath about Lewinsky, which prompted the criminal probe.

“The result the Supreme Court reached in Clinton v. Jones—that presidents are not constitutionally entitled to deferral of civil suits—may well have been entirely correct; that is beyond the scope of this inquiry,” Kavanaugh wrote. “But the court in Jones stated that Congress is free to provide a temporary deferral of civil suits while the president is in office.

“Congress may be wise to do so, just as it has done for certain members of the military. … Congress should consider doing the same, moreover, with respect to criminal investigations and prosecutions of the president. In particular, Congress might consider a law exempting a president—while in office—from criminal prosecution and investigation, including from questioning by criminal prosecutors or defense counsel.”

The paper goes on to say: “If the president does something dastardly, the impeachment process is available. No single prosecutor, judge, or jury should be able to accomplish what the Constitution assigns to the Congress.”

Bittman said the paper was an academic exercise of what Congress could adopt, and not an indication of how Kavanaugh would necessarily rule on existing law.

“We had a job to do. Judge Starr had a job to do, and he hired me, Brett Kavanaugh, and others to do it,” Bittman said. “Brett is a very thoughtful guy and put those thoughts on paper. He didn’t do anything he didn’t want to do. The statute requires the independent counsel [to] present a report to Congress.”

Bittman said the independent counsel’s office didn’t indict Clinton, but made an impeachment referral. So, the law review article is not inconsistent with the work Kavanaugh did for Starr, he said.

“Many Democrats have characterized this paper as a ‘get-out-of-jail-free card’ for Trump,” Bittman said. “The president is still subject to impeachment. He can still be prosecuted after he leaves office.”