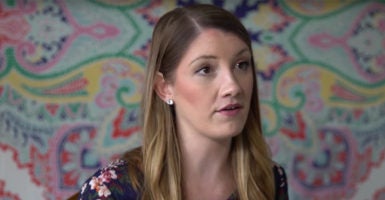 Kelly Clemente is a birth mom who wanted to choose a religious adoption agency to place her child. (Photo: The Daily Signal)

An amendment to protect the religious freedom of adoption providers was passed by the House Appropriations Committee to be part of the fiscal year 2019 Labor, Health and Human Services, and Education appropriations bill in a vote Wednesday.

“What occurred today is a milestone,” Rep. Mike Kelly, R-Pa., said in a statement provided to The Daily Signal.

“Over the course of five years and three Congresses, we’ve been fighting to advance the Inclusion Act against incredible obstacles,” Kelly added. “Now, it’s finally going to see its day on the floor of the People’s House. This is a win for the entire faith-based child welfare provider community and, most importantly, all the innocent children they serve who are waiting for forever homes.”

The amendment, which passed the committee in a 29-23 vote, would keep child welfare service providers from being discriminated against due to their moral and religious convictions.

Today my colleagues and I of the @HouseAppropsGOP passed my amendment which prohibits the discrimination of child welfare providers based on religious beliefs or moral convictions.

“Faith-based adoption agencies are under attack from left-wing activist groups looking to shut down child-welfare providers that place children according to sincerely held religious and moral beliefs,” Heritage Action for America, the lobbying affiliate of The Heritage Foundation, said in a statement supporting the measure.

“In Massachusetts, Illinois, California, D.C., and Philadelphia, adoption agencies such as Catholic Social Services have lost contracts with local governments or have been forced to shut down entirely because they operate on the belief that a child should be placed in a home with one mom and one dad,” the statement added.

Proud to support my colleague @Robert_Aderholt in today’s @HouseAppropsGOP markup. He offered an amendment to ensure faith-based adoption & foster care providers are not discriminated against for their religious beliefs. I agree, we must protect religious freedom.

Rep. Andy Harris, R-Md., said in a statement provided to The Daily Signal that areas like Philadelphia, which announced in March that it stopped using Catholic Social Services’ foster care program because it declined to place children with same-sex couples, are infringing on the religious liberties of Americans:

It is abhorrent that jurisdictions like Philadelphia, which are all too willing to provide sanctuary for criminal illegal aliens who threaten our community safety, openly discriminate against religious organizations that provide valuable charitable services to a community.

In fact, they apply a religious litmus test on those organizations in clear violation of the First Amendment. The passage of this amendment is a win for religious freedom and for children who need loving homes.

Kelly, the Pennsylvania lawmaker, also cited Philadelphia as a warning sign and reason why the lack of tolerance for beliefs on marriage and family must be protected:

What has happened in Philadelphia and elsewhere should appall anyone who cares not only about the safety and well-being of kids but also the future of religious liberty.

Like so many other cases, this is not a fight that conservatives or the faith-based community started but it is one that we’re ready to win. The left’s faith-shaming cannot be permitted to close the doors of one more adoption or foster care center in our country. For all the parents and providers who have been targeted and bullied by activists both inside and outside of government, today’s passage is a sign of hope.

Ryan T. Anderson, a senior research fellow at The Heritage Foundation and author of “Truth Overruled: The Future of Marriage and Religious Freedom,” told The Daily Signal in an email that the move to protect child welfare service providers is critical to protecting religious freedom for all:

Government should not discriminate against faith-based adoption agencies that decline to perform certain actions that conflict with the beliefs that motivate them to serve needy children in the first place. Protecting the conscience rights and religious liberty of private adoption providers takes nothing away from others.

Indeed, protecting a diversity of private providers and their ability to operate according to their values—and with families who share those values—makes it more likely that the greatest possible number of children will be connected with permanent, loving families.