Congress Wants to Do Even Less Budgeting. Here’s Why That Would Be Disastrous. 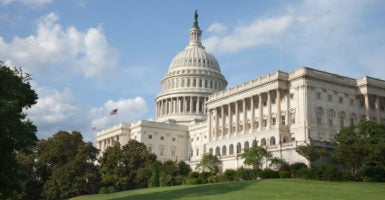 Lawmakers are considering a measure that would cut their budgeting workload in half by moving to a biennial process. (Photo: Willard/Getty Images)

It shouldn’t surprise anyone that Congress is once again looking for more ways to avoid responsibility.

On Wednesday, June 27, the Joint Select Committee on Budget and Appropriations Process Reform held a member day meeting that included testimony from Speaker of the House Paul Ryan, Minority Leader Nancy Pelosi, and other lawmakers.

Center-stage at the meeting were two reform proposals that, if enacted, would divorce Congress even further from budgetary responsibility: biennial budgeting and staggered appropriations.

Biennial budgeting would short-cut the current budget process by requiring the House and Senate to submit budget resolutions every other year, instead of annually.

A fitting bill name for any such legislative proposal might be “The Congressional Work Reduction Act.”

During the committee meeting, members were split on moving to a biennial budget and appropriations process.

Ryan spoke strongly in favor of both proposals:

If properly implemented, this will empower members to do a deeper dive on the most troublesome issues and enhance their ability to oversee the executive branch. It will reinvigorate member participation in the budget and appropriations process. It will enhance the importance of reconciliation, which is absolutely critical to addressing mandatory spending and the major drivers of our debt.

Others endorsed biennial budgeting but not biennial appropriations. “Two years for the budget, one year for the appropriations legislation is the route to go,” noted Pelosi.

I am the first to agree that the congressional budget and appropriations processes have eroded significantly in recent years … . But biennial budgeting, by which I mean biennial appropriations, would do nothing to address the underlying causes of this dysfunction—and would likely make matters worse by weakening congressional oversight of the executive, jacking even more decisions up to the leadership of both parties, and increasing our reliance on supplemental appropriations bills considered outside of the regular order.

Both Pelosi and Price indicated their support for transitioning to a biennial budget, as long as appropriations remain annual.

This bipartisan support for biennial budgeting is alarming. Annual budgeting requires lawmakers to come face-to-face with our growing national debt, and see the broader picture of our budgetary woes.

Relaxing that requirement for Congress would likely worsen the nation’s fiscal problems by enabling lawmakers to ignore the bigger budgetary picture every other year, while considering spending decisions on separate bits and pieces of the budget, without this broader context.

Overtime, we would likely see more spending, not less, with a biennial budget process. And perhaps that is exactly the appeal that allows both parties to embrace the change in a bipartisan fashion.

This is not just theory. A study by Paula Kearns in the Journal of Policy Analysis and Management looked at budgetary processes for each U.S. state. Kearns found that, all else being equal, biennial budgeting “exhibits a positive and statistically significant effect on state spending.” In plain English: Biennial budget states spend more than annual budget states.

Annual budgeting also allows lawmakers to leverage the powerful reconciliation process, which helps to fast-track changes to autopilot programs to bring spending in line with the goals set out in the budget resolution.

Given that mandatory spending accounts for two-thirds of federal expenditures, using reconciliation regularly is critical for lawmakers to face down the debt. Moving to a biennial budgeting process would seriously diminish reconciliation’s potential.

Another consideration is how a biennial budget would impact the executive branch. A biennial system would mean that the president would not fully process a real budget until three years into his or her term. Executive agencies, no longer tied up with preparing a budget every year, would find more time available to pursue more unchecked regulation, given the already minimal oversight Congress imposes.

Furthermore, new data from the Congressional Budget Office indicates that for fiscal year 2017, approximately half of discretionary budgetary authority granted to federal agencies by Congress was granted for more than one year. This means that half of funds to the executive branch do not expire at the end of one year, but rather continue for multiple years, and in some cases indefinitely.

Biennial budgeting would further remove Congress from the budget process, giving yet more authority to the executive.

There are many other problems with biennial budgeting that, unfortunately, were not addressed by lawmakers at the members day meeting. Budgeting less frequently incentivizes lawmakers to delay tough decisions, reduces Congress’ power of the purse, and discourages policymakers from setting clear visions for the values of our country.

In Pelosi’s words, “A budget is a statement of our national values.” If we can’t be clear on those values, then what purpose does Congress serve?

The root problem is that lawmakers remain fundamentally divided over serious national issues. It’s this divide, not the process itself, that clogs up our legislative branch.

Moving to a biennial budget and appropriations process only serves to reduce opportunities for serious budget debate and makes it easier for lawmakers to turn a blind eye to America’s growing fiscal crisis.

To keep Congress accountable, lawmakers should stick to the annual budget process and seize all opportunities to begin controlling spending and reducing the burden of the national debt on Americans—every year.