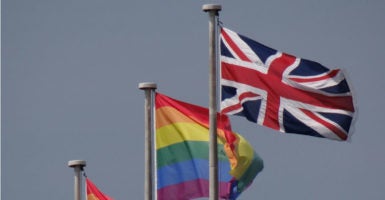 Dr. David Mackereth, from Dudley, West Midlands, was hired by the Department of Work and Pensions for “interviewing and then writing independent reports about the health of those claiming disability benefits,” the Telegraph reported.(Photo: Staisy Mishchenko/CrowdSpark/Newscom)

The belief that gender is assigned at birth has cost one British doctor his job as a disability assessor for the Department of Work and Pensions in the United Kingdom.

Dr. David Mackereth, 55, the father of four, was dismissed from the department after only recently being hired because he told the instructor for a training course that he would not recognize a pronoun that didn’t correspond to a patient’s biological sex, the Telegraph reported Sunday.

Mackereth, who worked 26 years for the National Health Service, says sex is established at birth and is both genetic and biological. That’s something that “has been believed by mankind for centuries,” he said.

“I’m not attacking the transgender movement,” Mackereth said, “but I’m defending my right to freedom of speech, and freedom of belief.”

Mackereth, from Dudley, West Midlands, was hired by the Department of Work and Pensions for “interviewing and then writing independent reports about the health of those claiming disability benefits,” the Telegraph reported.

“I don’t believe I should be compelled to use a specific pronoun. I am not setting out to upset anyone. But if upsetting someone can lead to doctors being sacked, then, as a society we have to examine where we are going,” he told the London newspaper.

After informing the instructor of his objections, “Mackereth then received an email from Advanced Personnel Management, the agency that employed him and would have hired him out to the DWP,” the paper reported.

The email explained that he could “undergo training” regarding the Department of Work and Pensions’ policy, but if he did not address his clients by their preferred pronoun, such action could be “considered to be harassment as defined by the 2010 Equality Act.”

Mackereth now accuses the Department of Work and Pensions and Advanced Personnel Management of violating his right to freedom of speech. The Telegraph also reported that he has concerns that “many other” people of faith like him could be dismissed from jobs if they believe in birth-assigned gender. He is a Reformed Baptist.

A Department of Work and Pensions spokeswoman told the Telegraph: “Dr. Mackereth made it clear during his training that he would refuse to use pronouns which did not match his own view of a person’s biological gender,” and that he would be violating the Equality Act by discriminating against individuals with a “protected characteristic.”

But Mackereth maintains that he is being discriminated against for his beliefs and even went so far as to say that the UK government was policing thought.

“The best biology, psychology, and philosophy all support an understanding of sex as a bodily reality and of gender as a social manifestation of bodily sex. Biology isn’t bigotry,” said Ryan T. Anderson, senior research fellow at The Heritage Foundation and author of “When Harry Became Sally: Responding to the Transgender Moment.”

“Government shouldn’t coerce people to think, speak, or act in ways that violate these basic truths. Indeed, there are human costs to getting human nature wrong,” he said.