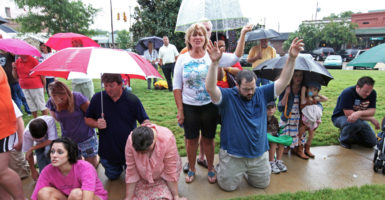 Residents of DeSoto County are pictured on Sept. 4, 2011 in Hernando, Mississippi while they gathered on the courthouse lawn to pray for and preach against the Supreme Court ruling that bans prayer at public-school events. (Photo: Robert King/Polaris/Newscom)

The Freedom From Religion Foundation accused a Tennessee school of violating constitutional law by allowing prayer at its graduation ceremony, but the school won’t budge.

Christopher Line, legal fellow with FFRF, wrote in a letter to Catoosa County Schools district that Ringgold High School should not have permitted public prayer at their May graduation ceremony, claiming that it was unconstitutional and that it alienated non-religious students, according to Chattanooga Times Free Press (CTFP). The school district responded, however, that graduation ceremonies were and would continue to be planned by students, and therefore the involvement of prayer was legal.

“The Supreme Court has continually struck down prayers at school-sponsored events, including public school graduations,” Line wrote to Renzo Wiggins, the school board’s attorney, according to CTFP. “… School officials may not invite a student, teacher, faculty member, or clergy to give any type of prayer, invocation, or benediction at a public high school graduation.”

Line claimed that a parent had contacted FFRF to alert them about the use of prayer at the school’s graduation ceremony.

Catoosa County Schools Superintendent Denia Reese responded to Line’s letter, saying that students plan and lead graduation ceremonies and that if FFRF wanted to file a formal legal complaint, the school district’s lawyer would be happy to respond.

“Graduation ceremonies are planned and led by students. If and when the system receives a complaint, the system’s attorney will thoroughly research the allegations, and when he has completed this research he will respond to the Freedom from Religion Foundation explaining how our students can continue to develop graduation programs and lead the ceremonies,” Reese wrote.

Line said that this was the sixth letter that FFRF had sent to Catoosa County Schools since 2013 complaining about a variety of school related events involving religion.