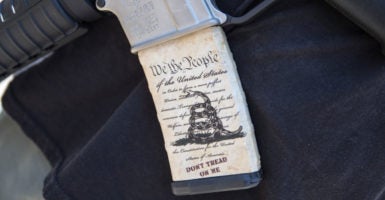 The month of June provided evidence of how vital firearms can be in the hands of a law-abiding citizen. (Photo: Sergio Flores/UPI/Newscom)

There is no denying that lawful gun owners use their firearms in self-defense far more often than those decrying the “myth” of a good guy with a gun would care to admit. Firearms are, in fact, used for self-defense often and effectively.

The Centers for Disease Control and Prevention, notorious for its anti-gun bias, acknowledges as much in its 2013 report on gun violence research.

There, in conjunction with the National Research Council, the CDC concluded that almost all national, comprehensive studies on the subject find that firearms are used for lawful defensive purposes between 500,000 and 3.5 million times every year in the United States.

Even assuming that the actual number of defensive uses is on the low end of that range (and there’s good reason to believe that, in fact, it falls at the higher end), firearms are used to protect life and property more often than they are used to commit crimes, according to the CDC.

The month of June 2018 provided ample evidence of just how valuable a firearm can be in the hands of a law-abiding citizen.

A cursory review of news stories from that month reveals the following:

As these stories demonstrate, lawful gun ownership can often mean the difference between a “victim” and a “would-be victim.” This is also consistent with the CDC’s conclusion that “[s]tudies that directly assessed the effect of actual defensive gun uses have found consistently lower injury rates among gun-using crime victims compared with victims who used other strategies.”

There are, of course, individuals who would use firearms to commit heinous criminal acts. But the proper response to this reality is not the wholesale stripping of constitutional rights from otherwise law-abiding citizens, or the prohibition of entire classes of firearms commonly used by those law-abiding citizens for lawful purposes.

That framework of broad gun control makes no one safer–least of all the brave citizens highlighted above.