Working With Green Groups, Local Governments Use This Kind of Lawsuit to Get Cash From Oil Giants 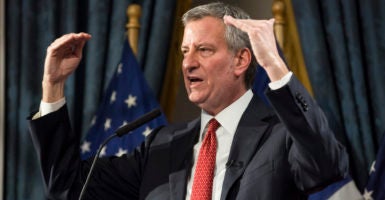 "We’re bringing the fight against climate change straight to the fossil-fuel companies that knew about its effects and intentionally misled the public to protect their profits," said New York City Mayor Bill deBlasio in January. (Photo: Natan Dvir/Polaris/Newscom)

Cities and counties across the country are teaming up with environmental groups to drill for revenue by using public-nuisance lawsuits against some of the world’s largest energy companies.

These local governments claim oil giants, such as Exxon Mobil, Chevron, and others, have caused global warming that they say is damaging their communities, and they want to be compensated for those damages—in most cases an undisclosed amount.

Since last summer, New York City, one county in Washington state, eight cities and counties in California, and three Colorado jurisdictions have challenged the oil giants through public-nuisance lawsuits.

However, some legal experts contend these lawsuits are a misuse of public-nuisance law—which is intended to protect the public from a safety or health hazard, rather than advance regulations.

The two cities wanted the five energy companies to pay for infrastructure improvements to protect their residents from sea-level rise and other purported effects of climate change.

In April, 15 Republicans state attorneys general, led by Curtis Hill of Indiana, filed an amicus brief supporting the dismissal of the case.

Hill said his office is monitoring the other lawsuits.

“These municipalities were seeking to regulate what was out of their nexus,” Hill said. “This was a shakedown. These nuisance lawsuits are used to hold up industry, specifically the energy-manufacturing industry.”

The National Association of Manufacturers has led the effort against public-nuisance lawsuits through legal action and advocacy.

“Other municipalities around the country who have filed similar lawsuits should take note, as those complaints are likely to end the same way,” NAM President Jay Timmons said in a statement. “New York City, [Boulder, Colorado], and the other California municipalities should withdraw their complaints and follow the lead of others that are focused on meaningful solutions.”

But with an appeal on the way from San Francisco and Oakland, the other pending cases aren’t likely going anywhere.

Richard Wiles, executive director of the Center for Climate Integrity, an advocacy group backing the lawsuits, told Reuters, “This fight is just getting started, and we expect to win.”

Federal law defines a public nuisance as a circumstance that injures or endangers the safety, health, comfort, or property of others. More broadly, a public nuisance at the state or local level could be defined as an activity affecting the health or safety of an entire community.

In either case, it’s distinguished from a private nuisance that would affect relatively few. The contrast would be the public nuisance of a factory spewing toxic chemicals into an entire city, as opposed to the private nuisance of playing loud music at 3 a.m., waking up the neighbors.

The municipalities are twisting an area of the law that has no application to climate issues, said Hans von Spakovsky, senior legal fellow with The Heritage Foundation.

“They are trying to use the courts in an area where it is up to the legislature, particularly Congress, to legislate,” von Spakovsky told The Daily Signal.

“They have no chance of winning if the judges in the case follow the law,” von Spakovsky said. “If they get an ideological judge who doesn’t care about the law—well, they might have some success. But, ultimately, any case like this, if it goes to the Supreme Court, is going to get thrown out.

“Eventually one of them will eventually get to the Supreme Court if the plaintiffs are foolish enough to keep appealing the decisions,” he said.

The city announced it also would divest its $189 billion public pension fund of investments in fossil-fuel companies over the next five years. The lawsuit claims the companies knew carbon emissions caused climate change, but were dishonest about the risks. The suit seeks to hold the oil companies liable for an undisclosed amount.

“New York City is standing up for future generations by becoming the first major U.S. city to divest our pension funds from fossil fuels,” Mayor Bill de Blasio said in announcing the legal action. “At the same time, we’re bringing the fight against climate change straight to the fossil-fuel companies that knew about its effects and intentionally misled the public to protect their profits.

“As climate change continues to worsen, it’s up to the fossil-fuel companies whose greed put us in this position to shoulder the cost of making New York safer and more resilient,” he said.

The first hearing was held on June 13 before federal Judge John Keenan of the Southern District of New York, who was reportedly skeptical of the city’s position that oil companies are to blame for purported global-warming damage.

“The firehouses all have trucks. The sanitation department has trucks. If you open the door and go out to Foley Square, you’re going to see five police cars,” said Keenan, an appointee of President Ronald Reagan. “Does the city have clean hands?”

EarthRights International, one of the environmental groups representing the three Colorado governments, said in a statement last week it wasn’t deterred by the court ruling in the San Francisco-Oakland case.

“Other lawsuits—including ERI’s own lawsuit on behalf of communities in Colorado—are proceeding and will not necessarily follow the same path,” the statement says. “Meanwhile, evidence continues to emerge of the oil industry’s role in misleading the public and delaying the shift toward carbon-neutral energy sources.”

Back in California, cases were filed separately in July 2017 by the city of Imperial Beach, Marin County, and San Mateo County—initially, in California state court—against Chevron, Exxon Mobil, BP, Shell, and other energy companies.

The cases were being heard together by federal Judge Vince Chhabria of the U.S. District Court for the Northern District of California, who accepted the plaintiffs’ motion to remand the case back to state court.

But the defendants filed an appeal, asking the court to stay the proceedings until the 9th U.S. Circuit Court of Appeals decides if all of the climate cases should be heard at the state or federal level. Chhabria, an appointee of President Barack Obama, granted the defendants’ stay, and the 9th Circuit will hear the matter later this month.

Separately, the city of Santa Cruz and county of Santa Cruz in December sued Chevron, Exxon Mobil, BP, Shell, and other companies. They are seeking damages for extreme flooding the plaintiffs blame on the harvesting and burning of fossil fuels.

The city of Richmond, California, filed another climate public-nuisance lawsuit in January against Chevron, Exxon Mobil, BP, Shell, and 25 other companies, alleging that harvesting natural resources and producing fuel has led to rising sea levels that threaten the city’s property.

Both cases were filed in state courts, but moved to federal court, where Chhabria is also deciding whether to send them back to state court.

In May, King County, Washington, filed a lawsuit against BP, Chevron, ConocoPhillips, Exxon Mobil, and Shell, claiming public nuisance. It wants to force the companies to fund an abatement program.