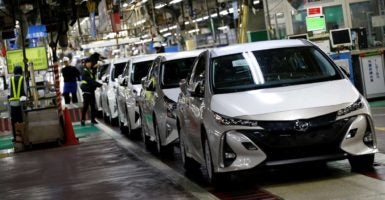 How did this happen? The Trump administration is revising the Corporate Average Fuel Economy standards imposed on automakers during the Obama era. In particular, they are no longer holding manufacturers to a 2025 fleet mandate of 54.5 miles per gallon.

When the potential rollback was first announced, Secretary of Transportation Elaine Chao declared it “a win for the American economy.” Then-EPA Administrator Scott Pruitt called it “good for consumers and good for the environment.”

While a victory for all consumers, it’s a particularly welcome relief to those in poor and minority communities looking to ascend the socio-economic ladder and get an equal shot at achieving the American Dream.

CAFE standards have been around for 40 years, but green crusaders in the Obama administration put them on steroids. During the Obama presidency, the industry was required to increase fuel efficiency by around nine miles per gallon. In 2012, it imposed a spike from 30.2 miles per gallon for a small passenger car in model year 2011 to 60 miles per gallon over 14 years.

“If vehicle prices had tracked furniture and appliance prices since 2007,” a 2016 Heritage study noted, “they would be 23.4 percent lower than they are today.”

Comparatively, the average cost of a car in the United States rose $6,200 above trending prices in other countries.

Using federal data, a National Automobile Dealers Association study concluded that between 3.1 and 14.9 million households might lack the credit necessary to buy a new vehicle under the original 2025 CAFE scenario. This fate would undoubtedly fall hardest on minority communities due to lower earnings.

And then there’s safety. One way to meet stringent fuel efficiency goals is to make vehicles smaller and lighter.

The Insurance Institute for Highway Safety explicitly warns that “bigger, heavier vehicles protect their occupants better.” That means those forced into the smaller cars are inherently less safe.

But all of this will at least help the environment, right? Maybe not.

Obama administration assertions about the effect of CAFE standards on climate change were both trivial and elusive. Then add mitigating factors such as poorer households keeping dirtier vehicles on the roads longer out of financial necessity.

Minority advocates embrace Trump’s CAFE relief. In a letter to Chao and Pruitt, the Project 21 black leadership network stated: “Excessive regulatory costs that make products unaffordable are one of the most significant non-racial obstacles to black economic progress … Increasing black hardship and jeopardizing driver safety for such a small payoff is simply irrational.”

The industry also responded to consumer demand. Ford scaled back its CAFE-geared small sedans–retaining the Mustang and Focus Active crossover while favoring SUVs and light trucks. This is Ford’s family-friendly, workforce-ready, and consumer-focused fleet.

The Trump administration’s rollback of fuel efficiency mandates to favor the present-day economy over ambiguous predictions is a smart move. It promises more vehicles people want to safely transport their families, engage opportunities, and fuel the economy. It also respects the situations of the American consumer–particularly those at the lower rungs of the economic ladder.