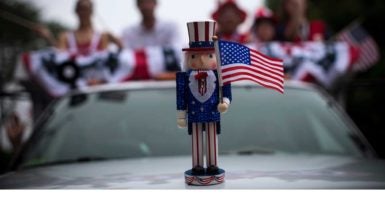 The 104th Islamist terror plot or attack against the U.S. homeland since 9/11 was planned for the Fourth of July. (Photo: Mike Segar/Reuters /Newscom)

On July 1, the FBI arrested Demetrius Pitts for planning a terrorist attack in Cleveland on the Fourth of July. This plot was the 104th Islamist terror plot or attack against the U.S. homeland since 9/11 and the 91st plot or attack that was homegrown.

The FBI first became aware of Pitts at the end of 2015 when he sent pro-terrorism Facebook messages to a political commentary show.

Over the course of the next few years, he continued to post on social media, increasingly threatening violence against the U.S. The FBI began a deeper investigation that revealed his desire to conduct an attack in the U.S. or travel abroad to join a terrorist organization.

In June 2018, an undercover FBI agent posing as an al-Qaeda “brother” met with Pitts. Pitts expressed a desire to attack government and military targets, with a variety of violent methods.

When told by the undercover agent that there were other “brothers” willing to carry out an attack, Pitts began planning an attack. He planned an attack on July Fourth.

The attack would involve weapons ranging from remote control cars with bombs that they would give to the children of military members, to a van filled with explosives. He decided the attack should be near the fireworks at Voinovich Park and that the nearby U.S. Coast Guard station would be a great target. Pitts thought of himself as the mastermind, while others would actually carry out the attack.

Pitts used his phone to do surveillance of various sites around Cleveland, including the Coast Guard station. He also made videos pledging himself to do violence against the U.S. and calling on others to rise up as well. He helped with logistics in finding a vehicle for the car bomb against the Coast Guard station and believed the bombing was ready to go for July Fourth.

Targeting the military and mass gatherings like the Independence Day fireworks are the two most common targets of Islamist terrorists.

Also common is that the FBI foiled this plot with a successful sting operation. Stings and the use of undercover officers or informants are some of the FBI’s most successful tactics to deeply investigate terrorists while keeping the public from any imminent harm.

This case also shows the disturbing reality that the FBI must keep an eye on certain radical individuals for years before they move to action.

Such long-term investigations consume limited resources and cannot always be sustained. Indeed, this has sometimes led to terrorists slipping through the cracks, as was the case with Omar Mateen, the shooter at the Pulse nightclub in 2016.

Mateen had been investigated by the FBI for about a year beginning in 2013 but not enough evidence was found to justify continuing the investigation.

Thankfully, this was not the case this time. The FBI kept track of Pitts and stopped him before he could engage in violence.

This Fourth of July, let’s thank the hardworking men and women of the U.S. law enforcement and intelligence communities for all they do to keep us safe at home.