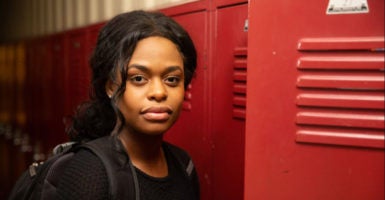 Alexis Lightcap is a plaintiff in the student privacy lawsuit against the Boyertown Area School District. (Photo courtesy of Alliance Defending Freedom)

A conservative legal organization is asking the full 3rd U.S. Circuit Court of Appeals to review the May ruling of a three-judge panel against school privacy in upholding a Pennsylvania school’s opening of its locker rooms, showers, and restrooms to students of the opposite sex.

“The U.S. Supreme Court has already spoken: The real differences between men and women mean that privacy must be protected where it really counts, and that certainly includes high school locker rooms and restrooms,” Christiana Holcomb, legal counsel for Alliance Defending Freedom, said in a statement.

The alliance, a nonprofit, public interest law firm, and allied attorneys are spearheading the appeal of the May ruling.

During the the 2016-17 school year, Boyertown High School in Boyertown, Pennsylvania, opened its restroom facilities and locker rooms to students of the opposite sex without warning.

On May 24, three judges on the 3rd U.S. Circuit Court of Appeals in Philadelphia heard oral arguments over the lawsuit, Doe v. Boyertown Area School District, and subsequently ruled 3-0 against student privacy.

Holcomb said Alliance Defending Freedom is asking for a full-court review in hope that a wider panel of judges will rule in support of students’ privacy.

“The panel’s decision is out of step with long-standing legal protection for privacy,” she said. “That’s why we are asking the full 3rd Circuit to weigh in on the valid concerns of these young students.”

After the 3rd Circuit panel’s ruling, Alexis Lightcap, a senior at Boyertown Area Senior High School and a plaintiff in the lawsuit, said the panel’s ruling was a personal affront on her privacy.

“Today’s ruling was very disappointing, and made me feel—again—like my voice was not heard,” Lightcap said. “Every student’s privacy should be protected.”

The American Civil Liberties Union is representing Aidan DeStefano, a transgender student at Boyertown Area Senior High and with the Pennsylvania Youth Congress, a coalition of LGBTQ youth leaders in the case.

“It’s important that trans students are given the opportunity to defend themselves against these shameful attempts to isolate and stigmatize them,” Leslie Cooper, senior staff attorney at the ACLU LGBT & HIV Project, said. “Schools can and should provide extra privacy protections or private restroom or changing areas for any student who requests it. But no student has a right to demand that transgender students be segregated from their peers.”

But Randall Wenger, an attorney allied with Alliance Defending Freedom who is chief counsel at the Independence Law Center, said the case is about protecting all students’ privacy rights.

“No student should be forced into an intimate setting—like a locker room or shower—with someone of the opposite sex,” Wenger said.

“The Boyertown District could have crafted policies that respect the privacy concerns of all students and are also sensitive to the needs of individual students. Instead, the district failed to fulfill its responsibility and harmed students rightfully concerned about their bodily privacy,” he said. “The district must correct its policy—not only for our clients, but for all students within the district.”