Fighting Bullies at the UN 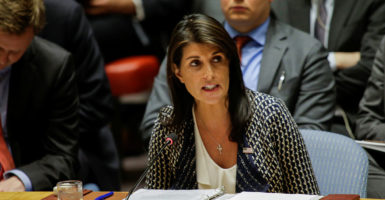 "It is outrageous for the Security Council to fail to condemn Hamas rocket attacks against Israeli civilians, while the Human Rights Council approves sending a team to investigate Israeli actions taken in self-defense," says Ambassador Nikki Haley. (Photo: Eduardo Munoz/Reuters/Newscom)

Recent outbreaks of violence at the border between Israel and Gaza garnered more than their fair share of biased media attention. Many liberal news outlets conveniently left out that the “protests”—which were actually people storming Israel’s border with the intent to breach it and murder innocents—were organized by Hamas with the cynical goal of prompting Palestinian casualties and global condemnation of Israel.

As expected, the United Nations followed the terrorist group’s lead and fell into line, heaping criticism on Israel.

The terrorists were, by their own admission, determined to infiltrate the Jewish state and sow as much death and destruction as possible. After Israel successfully defended its borders and citizens from these malicious would-be intruders, the world, the media, and the U.N. decried its justified actions as human rights violations, despite the fact that Hamas claimed the majority of victims as its own.

Shortly thereafter, the U.N. Security Council held a vote aimed at condemning Israel for the violence. The lone voice of reason was, as usual, the United States.

Thankfully U.S. Ambassador to the U.N. Nikki Haley vetoed this outrageous measure, which didn’t even mention Hamas or its involvement in organizing the protests. And she didn’t stop there. Haley also put forth a separate resolution condemning Gaza’s terrorist ruling group. There, once again, she stood alone.

But in the era of the Trump administration, the United States would rather be the lone voice of reason than kowtow to discriminatory world pressure, secure in the knowledge that we are doing the right thing by supporting our ally Israel.

There’s a proud precedent here. In 1975, U.S. Ambassador to the U.N. Daniel Patrick Moynihan delivered a prolific speech railing against Resolution 3379, which declared Zionism a form of racism. The United States voted against this decree and was again in the minority. Sixteen years later, because of American efforts, the resolution was revoked.

In recent days, Haley did as she has done before, following in Moynihan’s footsteps by giving a spirited defense of Israel’s actions and blasting those who are quick to jump on the Israel-hating bandwagon.

In her impassioned remarks, Haley condemned Hamas, and further condemned the U.N. for its unabashed bias against Israel.

“It is outrageous for the Security Council to fail to condemn Hamas rocket attacks against Israeli civilians, while the Human Rights Council approves sending a team to investigate Israeli actions taken in self-defense,” she said.

But, as Haley knows full well, the U.N.’s track record when it comes to Israel is horrendous.

In its first 10 years of existence, the U.N. Human Rights Council passed more than 130 resolutions against individual countries, many of which were directed at Israel.

And what upstanding citizens of the world haughtily hurl these condemnations? Countries including Cuba, Iraq, Qatar, and Venezuela, all of which are members of U.N. Human Rights Council, but have no moral high ground upon which to stand. When despotic regimes get a pass and the only democracy in the Middle East is repeatedly singled out for censure, that is a clear sign that prejudice is running rampant.

Meanwhile, let’s not forget “Agenda Item 7.” Israel is the only country in the world with a standing item on the Human Rights Council agenda. While Syrian President Bashar Assad butchers his people and genocide against the Rohingya people worsens daily, somehow the Jewish state is the only country that has earned a time set aside for its condemnation.

The United States, under the leadership of President Donald Trump, will not stand idly by in the face of such bigotry. At the president’s direction, Haley has made it clear that America stands with Israel and will support its right to defend itself from murderous neighbors.

Unfortunately, it is clear that if the United States isn’t willing to act, nobody else would. The bullies of the U.N. would win.

They won in 2016, when President Barack Obama shamefully refused to exercise America’s veto, allowing the passage of Security Council Resolution 2334 condemning Israel and fomenting Palestinian intransigence. During that dark day at the U.N., Israel was let down by its No. 1 ally.

Obama liked to talk about how he “had Israel’s back,” but his words were empty.

With Trump leading the way, the United States is once again standing up to the U.N. hypocrites and defending our friends.