Samantha Bee Writer: ‘Civility Is a Tool of White Supremacy’ 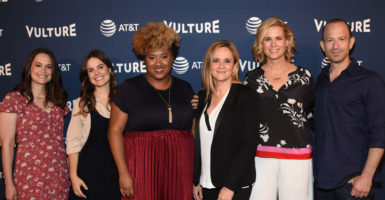 A writer for TBS’ “Full Frontal with Samantha Bee” went off on a Twitter rant Monday, saying that “civility is a tool of white supremacy.”

“Civility is a tool of white supremacy. Ok, cool. Byeeeeee!” Ashley Nicole Black wrote in a tweet, lashing out against nationwide calls for civility after influential Democrats like Rep. Maxine Waters of California called for liberals to remove Trump Cabinet members from restaurants and public places.

“If you see anybody from that Cabinet in a restaurant, in department store, at a gasoline station, you get out and you create a crowd. And you push back on them,” Waters said on Sunday. “Tell them they’re not welcome anymore, anywhere.”

Reasonable Democrats have called for calmer heads amid the heightened rhetoric against conservatives, paired with the doxxing of Immigration and Customs Enforcement officials earlier in June for which a professor at New York University is responsible.

Arne Duncan, who was secretary of education in the Obama administration, pointed out the similarities between chasing Department of Homeland Security Secretary Kirstjen Nielsen out of a restaurant June 19 and the U.S.’ history of racial segregation laws that made it legal not to serve black people in restaurants.

“My personal opinion: No matter how much we dislike or disagree with someone, we should not deny them the chance to have a meal,” Duncan wrote in a tweet on Sunday. “The history in our country of denying people access to restaurants, to water fountains and even bathrooms is too raw, too real. We can’t keep dividing.”

But Black was not pleased with his comparison, saying it’s “truly wild.”

“Wow,” Black responded. “Imagine using this country’s history of oppression to bolster your argument that we need to be nicer to the people trying to drag us back to that time.”

Bee was also under fire recently for calling the president’s daughter Ivanka Trump a “feckless c—” on May 30. Bee and TBS apologized the next day after losing some of her show’s sponsors.

“I would like to sincerely apologize to Ivanka Trump and to my viewers for using an expletive on my show to describe her last night. It was inappropriate and inexcusable,” Bee wrote in a tweet. “I crossed a line, and I deeply regret it.”

TBS did not respond to a request for comment from The Daily Caller News Foundation in time for publication.