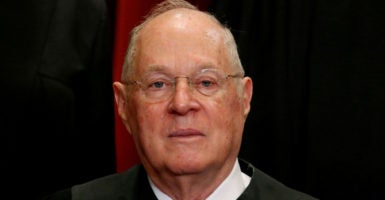 Justice Anthony Kennedy announced his retirement Wednesday, precipitating a generational political fight over the future of the U.S. Supreme Court.

Kennedy’s departure was announced Wednesday morning, after the justices released the final decisions of the court’s current term.

Few justices loom as large as Kennedy in the history of the high court. As the bench became an object of political competition and the tribunal itself began to reflect the country’s ideological entrenchment, Kennedy led narrow majorities to landmark decisions on gay rights, abortion, the First Amendment, and Guantanamo Bay detainees.

Dignity and civility occupied the center of his jurisprudence, values he saw emanating from the deepest recesses of the Constitution which provide a single unity to its divergent threads. The justice revived these principles in Tuesday’s travel ban case, where he tacitly admonished the Trump administration in a short concurring opinion many saw as a valedictory message.

“It is an urgent necessity that officials adhere to these constitutional guarantees and mandates in all their actions, even in the sphere of foreign affairs,” he wrote. “An anxious world must know that our government remains committed always to the liberties the Constitution seeks to preserve and protect, so that freedom extends outward, and lasts.”

The verbosity and drama which characterize his writing draw virulent critics, who say his rhetorical flourishes confuse important areas of law. The late Justice Antonin Scalia famously dragged Kennedy for descending into “the mystical aphorisms of the fortune cookie” in Obergefell v. Hodges, the Kennedy decision which legalized same-sex marriage. In that vein, Chief Justice John Roberts called a section of Kennedy’s Obergefell opinion “difficult to follow” in his own dissent in that case.

Other observers say his sweeping prose was typical of a justice supremely confident in his own abilities—yet prone to long bouts of crippling indecision.

Kennedy, a Ronald Reagan appointee, has served on the high court for 30 years. He was selected to succeed Justice Lewis Powell after Reagan’s first two nominees—Judges Robert Bork and Douglas Ginsburg—met chilly receptions in Washington. Democrats styled Bork an arch-reactionary and rejected his nomination in a humiliation floor vote, while Ginsburg withdrew after accounts of his past marijuana use appeared in the press.

Kennedy’s retirement will prompt the most ferocious confirmation battle of recent memory, as his departure under a Republican president places the right’s long-eluded Supreme Court majority within reach.