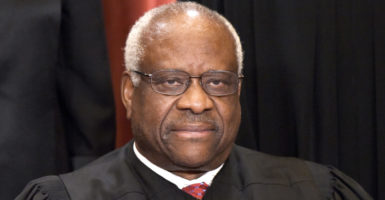 In an opinion by Justice Clarence Thomas, the court ruled that California’s law tried to “alter the content” of centers’ speech by forcing them to “inform women how they can obtain state-subsidized abortions—at the same time [the centers] try to dissuade women from choosing that option.” (Photo: AdMedia/Newscom)

The Supreme Court ruled Tuesday in favor of free speech in NIFLA v. Becerra, a case regarding California’s attempt to force pro-life pregnancy centers to advertise the state’s free or low-cost abortion program.

In other words, California is entitled to take a position on abortion, but it cannot force others to agree with and speak its message.

In 2015, California enacted Assembly Bill 775, the Reproductive Freedom, Accountability, Comprehensive Care, and Transparency (FACT) Act. As we explained in a Heritage Foundation report:

The bill requires state-licensed pregnancy centers, which provide medical services such as ultrasound examinations, health provider consultations, and medical referrals, to instruct women on how to receive ‘free or low-cost access to … abortion’ in direct contradiction of their mission of providing compassionate alternatives to abortion. Failure to comply carries the threat of a civil penalty of $500 for a first offense and $1,000 for each subsequent offense.

Additionally, the law requires unlicensed centers that provide nonmedical services such as counseling, education, maternity clothes and baby supplies to post extensive disclaimers in as many as 13 languages that they are not a licensed medical center. These notices must be posted on-site as well as online and in print and digital advertisements. The prominence and size of the disclaimer—in addition to being compelled speech—is so voluminous that it detracts from a pregnancy center’s primary message and is so extensive that advertisements are cost prohibitive.

In an opinion by Justice Clarence Thomas, the court ruled that California’s law tried to “alter the content” of centers’ speech by forcing them to “inform women how they can obtain state-subsidized abortions—at the same time [the centers] try to dissuade women from choosing that option.”

The court explained that such a content-based regulation of speech is “presumptively unconstitutional and may be justified only if the government proves that [it is] narrowly tailored to serve compelling state interests.” That’s a high bar that California failed to meet.

The court has been more deferential to state regulations that merely require businesses to disclose factual, noncontroversial information about services they offer. But, as the court noted, California’s regulation “in no way relates to services” the centers provide; instead, it forced the centers to advertise information about the state’s abortion services—which is “anything but an ‘uncontroversial’ topic.”

The court also held that requiring unlicensed centers to include an onerous disclosure in their advertisements “unduly burdens protected speech.” The court pointed out that if a center ran a billboard that read “Choose Life,” it would have to include the state’s 29-word disclaimer in the same font size and in multiple languages.

This “drowns out the [center’s] own message” and “effectively rules out the possibility of having a billboard in the first place.” The state failed to prove this regulation was justified.

The court wrote that California “has not demonstrated any justification for the unlicensed notice that is more than ‘purely hypothetical.’” Likewise, the regulation was “wholly disconnected” from the state’s claim that these notices were necessary to provide information about state services to low-income women. Further, the regulation would have the effect of chilling protected speech.

Now the case returns to the lower court, which initially rejected the pro-life centers’ motion for a preliminary injunction because it determined the centers were not likely to succeed on the merits of their challenge. Given the Supreme Court’s ruling, the lower court must re-evaluate the centers’ claims, and it cannot afford their First Amendment claims less protection under the nonexistent “professional speech” standard.

This ruling is a victory for all Americans because regardless of whether you agree with the message these pregnancy centers stand for, we all should be wary of government compelling dissenting voices to communicate a message that directly contradicts and undermines their very reason for existing.