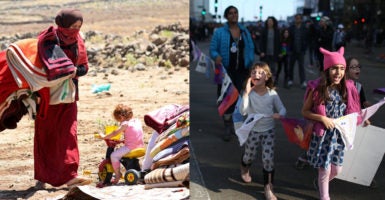 Suggesting that many of the world’s most grave problems have been solved, experts in women’s rights from around the world rank the United States among the 10 most dangerous countries for women.

Sadly, however, issues such as female genital mutilation, arranged marriage, rape as a weapon of war, honor killings, and maternal mortality haven’t stopped.

Rather, leading “experts” in their fields appear to have lost any perspective, categorizing the U.S. as almost as dangerous as Nigeria, where Boko Haram militants kidnap, rape, and sexually exploit women and girls.

The ranking was compiled by the Thomson Reuters Foundation, the philanthropic arm of Reuters, “the world’s largest news and information provider.” The foundation asked 548 “women’s rights experts” to name the most dangerous countries from among the 193 United Nations member states in health care, access to economic resources, customary practices, sexual violence, and nonsexual violence and human trafficking.

The results came in as follows:

—South Sudan and Central African Republic, where the armed forces systematically rape women as a weapon of war.

—Mauritania, where an estimated 40 percent of the population is enslaved, presumably many of them women.

—North Korea, where tens of thousands of women are trafficked and trapped in prison camps.

—Iran, where women are arrested for taking off their hijabs and protesting an oppressive regime.

—China, where millions of baby girls were murdered under the country’s one-child policy.

—And Myanmar, where a genocide is happening under our watch.

I could go on. But somehow, it’s the U.S. where women are doomed.

If living in the United States is more dangerous for women than living in a country where boy’s and men’s bodies are used to create bonfires while women are raped and baby girls are grabbed by the leg and thrown into the fire to burn, then forgive me—I must be missing something. As far as I was aware, women in the U.S. face injustices, but we still have equality before the law.

The same can’t be said for these nine other countries, or the dozens of others that didn’t make the list of most dangerous countries for women.

The inclusion of the U.S. in this group demonstrates the level of ignorance among “women’s experts,” and why so many of them shouldn’t be trusted. It reflects the dangerous “victimhood” ideology that’s pervasive among college students, and shows how selfish American feminism has become.

Harvey Weinstein, after all, does not equate with Boko Haram.

In explaining the decision to rank the U.S. as the 10th-most dangerous country for women, the Thomson Reuters Foundation said:

The United States shot up in the rankings after tying joint third with Syria when respondents were asked which was the most dangerous country for women in terms of sexual violence including rape, sexual harassment, coercion into sex and the lack of access to justice in rape cases. It was ranked sixth for non-sexual violence.

The survey was taken after the #MeToo campaign against sexual harassment went viral in October last year as Hollywood movie mogul Harvey Weinstein was accused of sexual misconduct by more than 70 women, some dating back decades. Hundreds of women have since publicly accused powerful men in business, government and entertainment of sexual misconduct and thousands have joined the #MeToo social media movement to share stories of sexual harassment or abuse.

Specifically, experts ranked the U.S. the third-worst country for the category Sexual Violence, “including rape as a weapon of war; domestic rape; rape by a stranger; the lack of access to justice in rape cases; sexual harassment and coercion into sex as a form of corruption.”

That puts us just between Syria and Congo, the latter once called “the rape capital of the world.”

The U.S. also ranked sixth in Non-Sexual Violence, “including conflict-related violence and forms of domestic physical and mental abuse.” That leaves us just before Saudi Arabia, where women recently gained the right to drive.

#MeToo was a long, overdue movement, and the good news is that it’s creating change. Men who do wrong are being held accountable, and more women feel empowered to speak up. Yes, there’s still a lot of work to do. But the majority of our #MeToo cases don’t compare to women’s cries in the Middle East. Nor do our injustices hold water to the inequalities of women in the developing world.

We might face sexual harassment, assault, and even violence, but it’s not systematically used as a weapon of war. And sure, some of us don’t like our leader, but our government isn’t gassing its own people.

Speaking in relative terms, women in the U.S. are safe.

For anyone who’s perplexed about the level of outrage in America today, look no further than the results of this survey. According to “women’s experts,” there are 183 countries where women are better off living than the U.S.

To be fair, the U.S. does allow women to be thrown out of restaurants, and Democratic leaders call on their supporters to harass political opponents. But even so, women here have it pretty good. So good, in fact, that our borders are overwhelmed with people dreaming of calling this place “home.”

To pretend that life in America is more dangerous than so many other countries is nothing short of sad, insulting, and ludicrous. Because let’s be clear: Women are far better off living in the U.S. than they are in places like Myanmar.

“Women’s experts,” of all people, should know this.