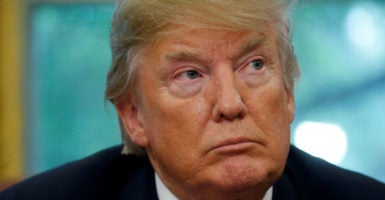 The Heritage Foundation has released its annual “Blueprint for Balance,” which, if fully adopted, would cut taxes, maintain a strong national defense, and balance the budget in six years.

The blueprint’s proposals are not merely financially responsible; they also limit the federal government to a more proper size and promote individual liberty and a strong civil society. The blueprint would eliminate programs that promote favoritism, diminish entrepreneurial incentives, fall outside the proper scope of the federal government as delineated by the Constitution, and waste taxpayer dollars.

The plan would put power back into the hands of American families and limit growth in government, which should be priorities for any administration that wants to empower people, protect individual liberty, promote economic freedom, and allow its people to prosper.

One critical blueprint policy recommendation would repeal the Affordable Care Act’s enhanced funding for Medicaid expansion. This would end the inequitable treatment in federal reimbursement which preferences the Medicaid expansion population over other more vulnerable populations such as individuals with disabilities, the elderly, and poor children and parents. This proposal would save $116 billion in the first year.

The Heritage and Trump administration proposals, which direct assistance to those most in need and promote self-sufficiency through work, would save taxpayers $11 billion in one year.

Other Heritage proposals included in the Trump budget focus on unleashing the potential of the American economy through deregulation and by promoting competition over corporatism.

For example, both the president’s budget and the “Blueprint for Balance” eliminate the Department of Agriculture Rural Business-Cooperative Service, which operates financial assistance programs for rural businesses instead of letting private competition determine market outcomes. Eliminating similar federal programs would encourage business growth and expand employment opportunities across the American economy.

Heritage and the administration don’t agree on every issue, however. The Trump administration fiscal year 2019 budget rejects 15 percent of the savings proposed in the blueprint.

Many important blueprint recommendations are unaddressed in the president’s budget. Medicare and Social Security, two of the main drivers of the national debt, require substantial reform. The president’s budget takes no action to address these programs.

Heritage calls for transformation of Medicare into a defined contribution program that would expand choice, increase competition, and save $61 billion in a year, but the Trump budget does not mention this. It also fails to include proposals to expand the current threshold for Medicare income-related subsidies, harmonize Medicare’s age of eligibility with Social Security’s age of eligibility, and update Medicare premiums. These three reforms would save approximately $78 billion in one year.

Ensuring Medicare, Medicaid, and Social Security are financially sustainable is critical to keeping taxes low and growing the American economy. Former Trump campaign adviser Corey Lewandowski recently highlighted Heritage’s entitlement reform proposals and called on the president to act. “The solution is for a strong leader to push to reform these programs while restructuring them in a way that still provides a safety net to those in need,” he said.

Nonetheless, the Trump budget for fiscal year 2019 make serious inroads toward beginning to right-size the federal government. The president and Congress must work together to address America’s growing fiscal crisis.