Families of Victims of Illegal Aliens Tell of ‘Permanent Separation’ From Children, Being Ignored by Media 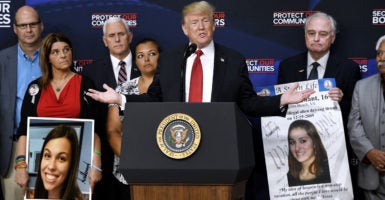 President Donald Trump discusses immigration during an event with "angel families" who lost loved ones to violence by illegal immigrants on Friday. (Photo: Olivier Douliery/Abaca Press/Newscom)

With President Donald Trump still facing criticism over separating migrant families who illegally crossed the border, other families met with the president Friday to share their stories of “permanent separation” from children killed by illegal immigrants—and to complain of being ignored by the news media.

Among those family members were Laura Wilkerson, who recalled the 2010 slaying of her son Josh.

“He was brutally tortured, strangled over and over. He was set on fire after death. His last hours were brutal,” Wilkerson said, standing on a stage at the Eisenhower Executive Office Building with Trump, administration officials, and family members of 13 other victims of crimes by illegal immigrants.

They were among the “angel families” advocating strong enforcement of immigration laws.

Wilkerson contrasted their situation with those of illegal immigrant parents who can communicate with the children they’ve been separated from on Skype.

“As with everyone standing up here, none of our kids had a minute to say goodbye. We weren’t lucky enough to be separated for five days or 10 days,” she said. “We were separated permanently. If we want to be close to our kids, we have to go to the cemetery. We can’t speak with them. We can’t Skype with them.

“You guys know the permanent separation. It’s the media that won’t share it with other people. It’s permanent. We can never have him again on this earth. Thankfully, I’ll see him again in heaven,” she said.

Trump signed an executive order on Wednesday to halt the separating of migrant parents and children caught illegally crossing the southern border.

“We’ll not rest until our border is secure, our citizens are safe, and we end this immigration crisis, once and for all,” Trump told the families. “Your loved ones have not died in vain.”

Other officials at the event included Vice President Mike Pence and Thomas Homan, who is retiring at the end of the month as acting director of Immigration and Customs Enforcement.

“These are the American citizens permanently separated from their loved ones,” Trump said. “The word you have to think about is ‘permanently.’”

Steve Ronnebeck, whose 21-year-old son, Grant, was fatally shot over a pack of cigarettes, criticized the news media for ignoring thousands of Americans killed by illegal immigrants since 9/11 amid the virtually nonstop news coverage regarding the separating of illegal immigrant families.

Mary Ann Mendoza’s son—Mesa, Arizona, Police Sgt. Brandon Mendoza—was killed in 2014 in a vehicle accident with an illegal alien who was allegedly driving with a blood-alcohol level at three times the legal limit.

“As you know, they could fill this stage up every day for the next five months of victims of illegal alien crime, and it would just keep going,” Mendoza said. “Unfortunately, we are members of a club of our children or loved ones who have been killed by illegal aliens.

“But there are hundreds of thousands who are affected by illegal alien crime, rape, assault, identity theft. These are things that go unreported, unchecked,” she said.