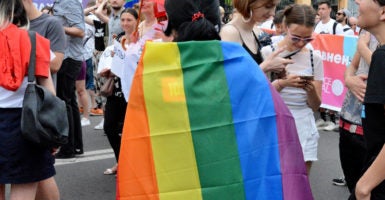 The World Health Organization cited “clear” evidence that being transgender “is not a mental disorder, and indeed classifying it in this can cause enormous stigma for people who are transgender.” (Photo: CreditAlexandr Gusev / Pacific Press/Newscom)

The World Health Organization announced Monday that it will not classify being transgender as a mental disorder in its upcoming 11th edition of its International Classification of Diseases.

“Gender incongruence, meanwhile, has also been moved out of the mental disorders in the ICD, into sexual health conditions,” the WHO said in a report.

The WHO cited “clear” evidence that being transgender “is not a mental disorder, and indeed classifying it in this can cause enormous stigma for people who are transgender.”

The announcement comes the same day the WHO ruled “gaming disorder” as a new mental health disorder to be included in the International Classification of Diseases.

The National Center for Transgender Equality conducted a poll in 2015 that painted a “troubling picture” of the mental health issues faced by many transgender Americans.

In addition, “a staggering 39 percent of respondents experienced serious psychological distress in the month prior to completing the survey, compared with only 5 percent of the population,” according to the center.

A WHO representative clarified in a video why gender incongruence was reclassified as a sexual health condition.

“It was taken out from mental health disorders because we had better understanding that this wasn’t actually a mental health condition,” the representative said. “And leaving it there was causing stigma.”

The WHO hopes removing the stigma surrounding being transgender will help affected individuals seek the care they need.

“The intention is to reduce barriers to care,” said Geoffrey Reed, the psychologist who coordinates the mental health section of the International Classification of Diseases.