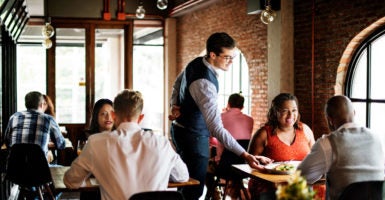 If a 10 percent tax on restaurant meals wasn’t enough to jack up the cost of dining in Washington, D.C., city residents just voted for a 275 percent increase in the minimum wage for tipped workers.

Currently, the minimum wage for workers who also receive tips is $3.33 an hour in the district. Initiative 77, which passed with 55 percent approval on Tuesday, will raise that to the same rate as the district’s standard minimum wage of $12.50, and it will rise further to $15 by 2020.

But tipped workers in D.C. already receive at least $12.50 in minimum wage because restaurants have to make up the difference if a worker’s earnings (tips plus wages) fall below the minimum wage.

D.C. bartender Frank Mills understands that the $5 per hour wage paid by his employer bears little relationship to his actual income, which is up to $36 per hour. He worries the restaurant will now have to charge higher prices to cover higher labor costs, and that the higher prices could translate to fewer tips and less income.

Talking to a reporter, Mills noted, “The economics here are not easy.” He worries happy hour customers will stop coming in from Maryland and Virginia due to the high prices. “To tell me all of a sudden we need a change when we’ve been thriving is backward thinking, truly.”

The typical restaurant spends about one-third of its revenue on labor costs. Since full-service restaurants make a net profit of  about 6 percent on average, it’s obvious that restaurants will not be able to absorb this large bump in wages. Something has to give.

The response is likely to be a combination of fewer workers, higher prices, poorer service, and closing restaurants—none of which is good for the customers.

Consider a modest-sized restaurant in the district, one that has six servers waiting tables. The new tipped minimum wage will drive up their employment costs by about $240,000 per year.

Those cost increases will cause restaurants to lay off workers and raise prices.

A Heritage Foundation study that looked at the effect of a $15 minimum wage on the fast food industry found that it would increase prices by 38 percent and reduce employment by 36 percent.

Since this measure only affects D.C.’s tipped workers, the effects will not be as widespread as if applied to all workers. But they will no doubt take a toll on the restaurant industry.

It’s no surprise that some of the strongest opposition to Initiative 77 came from the restaurant industry and even many restaurant workers. More than 100 local restaurant and bar owners—from Rose’s Luxury, Big Hunt, Thip Khao, and beyond—signed a letter asking residents to vote “no” on Initiative 77.

What may be surprising is that the majority of the D.C. City Council—hardly a bastion of free-market conservatism—also opposed the initiative.

I think if people vote for it, they would be voting for decreasing the pay of the thousands of servers who are making a living, and a good living, in D.C. right now. … And I think what’s on the table would dramatically reduce the earnings of our servers. But you don’t have to listen to me, you listen to them, and they’ll tell you, the servers across the city, they are not interested in Initiative 77.

That’s probably because they understand firsthand what the economic research shows. The Census Bureau recently found that higher-tipped wages do not typically result in higher pay for tipped workers because higher wages are offset by lower tips. Moreover, the research found that raising the tipped minimum wage above $5 per hour led to fewer tipped-wage jobs.

Proponents of Initiative 77 argued that working for tips forces servers to tolerate obnoxious behavior on the part of customers, and that raising the minimum wage would mitigate the problem.

But Initiative 77 does not end tipping. Under the new policy, servers will still be working for tips and will face the same pressure to put up with deplorable customer behavior. The only difference is their employers will now be in a tougher spot financially.

Fighting workplace harassment is a worthy aim, but Initiative 77 is no solution. It’s also a sketchy weapon for raising wages for restaurant employees. The real outcome will be grim: fewer jobs, and fewer work hours for those who manage to keep their jobs.