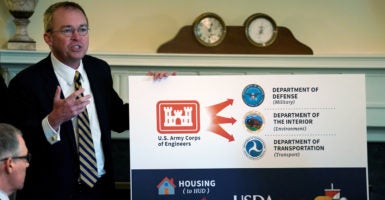 Combining the Education and Labor departments is among 32 proposals in a plan released Thursday by the Office of Management and Budget in response to a charge President Donald Trump issued 14 months ago.

“We wanted to change the dialogue in Washington, to say it’s not acceptable to have things that just don’t make sense,” Margaret Weichert, OMB’s deputy director for management, told The Daily Signal.

Weichert did not provide an estimate of savings, but said it would be clear in the administration’s next budget proposal.

Mick Mulvaney, director of the Office of Management and Budget, lauded the report’s recommendations Thursday during a Cabinet meeting convened by the president.

By the direction of @POTUS, we released a plan to make government more effective, efficient and accountable to better serve the American people.

The OMB’s 132-page plan also would merge the food component of the Food and Drug Administration, now part of the Department of Health and Human Services, into a Department of Agriculture entity to be known as the Food Safety Agency.

The report notes that the USDA regulates chicken, but the FDA oversees eggs—if the eggs are in shells. If the eggs are processed and in a carton for pouring, then it’s the USDA’s job.

“Our favorite one is an open-face roast beef sandwich is regulated by the Department of Agriculture,” Weichert said. “If you stick a layer of bread on top of it, and you add new bureaucracy, it switches to FDA. That just doesn’t make sense.”

Since the Labor Department and the Education Department both are responsible for learning and skills for Americans, the Trump administration wants to create a single Department of Education and the Workforce.

The merger, if approved by Congress, would put the United States in line with most other developed nations that are part of the Organization for Economic Cooperation and Development, Weichert said.

“When it comes to education and labor, most OECD countries managed education and labor missions in an integrated fashion. It’s actually part of the kind of competitive advantage dialogue that you can see in Europe and China,” Weichert told The Daily Signal, adding:

Lifetime learning and whatever form of education is needed to both drive the needs of society broadly, but also to drive the economy, is integrated. The House committee itself that has jurisdiction over these two agencies is a single committee.

Rep. Virginia Foxx, R-N.C., chairwoman of the House Committee on Education and the Workforce, called the proposed change a long overdue recognition of the connection between the two missions.

“We welcome the administration’s focus on education and workforce issues together, and as we continue our oversight over the Department of Education and the Department of Labor, we look forward to working with the administration on the proposal and how the new department could function to best serve American students, workers, job creators, and families,” Foxx said in a public statement.

The merger idea already is getting pushback, though, including from unions.

“The proposed merger of the departments of Labor and Education is yet another attempt by the Trump administration to weaken programs that serve and protect working families and to concentrate even more power in the hands of large corporations,” Chris Shelton, president of the Communication Workers of America, said in a formal statement.

In general, the OMB report calls for combining the functions of several departments and agencies and largely eliminating duplication.

Between a quarter and a third of the recommendations may be done through executive action, but the bulk of them would require congressional action, Weichert said.

In April 2017, Trump signed Executive Order 13781, which directed the Office of Management and Budget to propose a plan that would reorganize governmental functions to limit duplication.

The resulting plan contains solid ideas, said Paul Winfree, who was director of budget policy at the White House when Trump asked for the reorganization plan. Winfree since has returned to his position as director of the Roe Institute for Economic Policy Studies at The Heritage Foundation.

“The Heritage research team started thinking through a reorganization proposal more than three years ago,” Winfree said in a statement provided to The Daily Signal. “Early in the administration, I drafted the executive order that established the plan for assembling the proposal, which the president signed.”

“OMB worked closely with the Heritage team,” Winfree said, “and it’s obvious from reading the administration’s proposal that everyone is moving in the same direction.”

The federal government spends about $250 million a year for education programs on financial literacy across more than 20 agencies. The report recommends consolidating programs to save time and taxpayer resources.

The plan also calls for moving programs providing rural housing loan guarantees and rental assistance out of the Agriculture Department and into the Department of Housing and Urban Development, locating all federal housing programs in a single Cabinet department.

“To be sure, there’s going to be a lot of good public-sector drama around some of these proposals,” Weichert said, adding:

Past presidents, going back decades, have tried to reorganize and reform government but haven’t reached the desired effect, said Max Stier, president of the Partnership for Public Service, a nonpartisan research group.

“No one can reasonably dispute that our government needs reform, but structural reorganizations are rarely the most effective way to improve service to our citizens,” Stier said in a public statement.

The OMB report notes that President Warren Harding created the Bureau of the Budget in 1921 in one of the earlier reorganization attempts of the 20th century.

“For the administration’s reorganization plans to succeed, the president and members of his administration must articulate a government-wide vision for reform, the rationale for each proposal, and how the administration will implement changes and measure progress,” Stier said. “The White House also must get congressional buy-in and bipartisan support, make substantial, upfront investments, and plan for sustained attention over many years.”

Still, Weichert contends now is a time for action.

“Our system was designed after World War II, addressing legacy problems that in many cases are not problems today, and, we are 20 years into the 21st century, fundamentally. We have no time to waste,” she said.