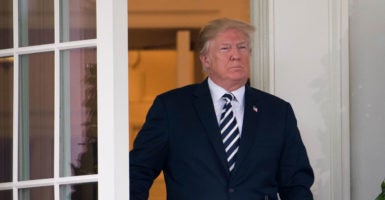 This week, the Trump administration is moving forward with significant regulatory relief for millions of Americans seeking more affordable health coverage and better choices than they can get under Obamacare.

The Department of Labor, pursuant to President Donald Trump’s October 2017 executive order, has just published a final rule to enable small businesses to more easily join together and form association health plans. The new rule would apply to sole proprietors, the self-employed, or persons owning their own businesses, allowing them to take advantage of these plan offerings.

Authorized under federal law, the rules governing association health plans are the same rules that exist today that enforce consumer protections in large group, or corporate health insurance. Persons with a pre-existing medical condition, for example, cannot be denied coverage, and federally regulated association health plans cannot drop persons from their coverage because they get sick, or charge them higher premiums because they have a pre-existing condition.

When Trump ordered the Department of Labor to develop the new rules last year, he wanted to give small employers and employees who work in the same kind of business, such as plumbers or electricians, the right to form these associations. He envisioned American businesses joining and establishing large, common health insurance pools to provide affordable coverage for workers and their families anywhere in the nation.

With these new pooling arrangements, governed by updated regulation, the associated firms would be able to offer health insurance to large numbers of workers and their families at the city, county, or state level, or in metropolitan areas that cross state lines. Large interstate pooling through the vehicle of business-based health insurance could emerge under the new rule.

Broader availability of these plans could also reverse the continuing downward slide in the number of small businesses offering coverage. The National Federation of Independent Business reports that over the period 2004 to 2016, the number of small businesses offering insurance coverage fell from 42 percent to 29 percent. That decline sharply accelerated under Obamacare between 2013 and 2015.

Because these plans would be federally regulated group health insurance, employers, employees, and their families who would join together in association health plans would also qualify for the generous job-based, federal tax relief for employer coverage.

It is hard to overestimate the crucial importance of this tax relief. In a June 15, 2018, letter to the secretary of labor, Sen. Lamar Alexander, R-Tenn., and 30 of his Senate colleagues highlighted the tax and economic advantages of the Trump regulatory reform:

Employer-provided coverage is approximately $5,000 cheaper per policy for a family of four because of federal tax breaks. Furthermore, when sole proprietors and small businesses join together to purchase as a larger group, employers may reduce their administrative costs, bargain for better deals from insurance companies, and create stable risk pools with more people.

Soaring premiums and explosive deductibles characterize Obamacare’s individual markets in most states. In an analysis of these markets in seven states, actuaries estimate that 2018 individual premium rates averaged 37.3 percent for the standard (“silver”) plans.

Association health plans would be particularly attractive for middle-class Americans who do not qualify for the generous Obamacare health insurance subsidies because their income is too high. Likewise, unless they are self-employed, none of these middle-class Americans can get individual tax relief for the purchase of Obamacare coverage under current law. Many of these persons would be able to secure far more affordable, stable, and flexible coverage for themselves and their families through a new, federally regulated association health plan.

Association health plans could have a substantial impact in the health insurance markets, reducing the costs and expanding health insurance coverage for millions of Americans. As Alexander and his colleagues note, there are 11 million Americans who are uninsured because they work for a small firm that does not offer coverage who could directly benefit from this option.

Moreover, there are 9 million Americans in Obamacare’s individual markets who get no taxpayer subsidy, for whom the new association health plans would be an attractive option.

Preliminary work by Avalere, an independent health care consulting firm, paints a mixed picture. It projects an increase in 130,000 uninsured over four years, as well as an increase in enrollment in association health plans of about 3.2 million, drawn from Obamacare’s individual and small group markets.

Avalere also projects a robust reduction in annual premium costs. For persons leaving the small group market, Avalere estimates a premium cost reduction of about $2,900. For persons leaving the individual market, premiums would be $9,700 less. Avalere also projects that the exodus from Obamacare would increase premiums in the individual market by an estimated 3.5 percent, and 0.5 percent in the small group market.

In short, the impact on Obamacare premiums would range from modest to minimal.

The market, driven by resurgent choice and competition, will determine whether enrollment or cost reductions are either modest or robust. In either case, persons will be able to keep Obamacare if they like it, or get the insurance they want at lower costs.

Relief cannot come soon enough. Millions of Americans are struggling with Obamacare’s skyrocketing health insurance costs, declining choice and competition, and narrower networks of doctors and medical specialists. While liberals in Congress want to prop up Obamacare with more regulations and bigger taxpayer subsidies, Trump is offering Americans a way out.