What We Need in Our Federal Judges 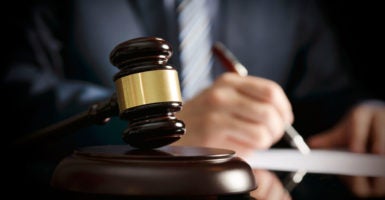 The level of conflict over President Donald Trump’s judicial nominations exceeds anything in recent memory. That conflict will only escalate should a new vacancy occur on the Supreme Court—a possibility that has been floated in recent months.

In one important way, the process of appointing federal judges is similar to any hiring process: It must be guided by a job description for the position being filled. Unfortunately, most of our fellow citizens are less equipped with such knowledge than they should be.

Last year, for example, the Annenberg Public Policy Center at the University of Pennsylvania found that only one-quarter of Americans can name all three branches of government, down a dozen points in just six years, and one-third cannot name even a single branch.

A 2016 poll by the American Council of Trustees and Alumni revealed that 10 percent of college graduates believe that Judge Judy Sheindlin is on the Supreme Court. Folks who don’t know what the judicial branch is are unlikely to know what judges are supposed to do.

There isn’t much dispute that, in general, federal judges do two things: They interpret and apply the law, such as statutes and the Constitution, to decide cases. The real conflict is about how judges should approach these tasks of interpreting and applying the law.

There’s a right way and a wrong way to be a judge, and the choice determines whether our system of government works the way it was designed. Sen. Orrin Hatch, R-Utah, has explained that the right way is marked by impartiality, while the wrong way is driven by politics.

Here is a useful definition of impartiality: “a principle of justice holding that decisions should be based on objective criteria, rather than on the basis of bias, prejudice, or preferring the benefit to one person over another.” In other words, judges should both interpret and apply the law using objective criteria rather than their own biases or preferences.

The impartial way to decide cases begins with a judge knowing what ordinary students were once taught in civics class: that making and interpreting the law are two different things.

The political way to decide cases involves taking the words of statutes or the Constitution—chosen by the American people and those they elect—and making those words mean what the judge wants them to mean. Political judges do this so that cases come out the way they prefer, favoring certain parties or serving certain political interests.

This is how the Supreme Court can claim that the Constitution says something that it doesn’t, or that statutes that meant one thing last year mean something different today.

Impartial judges, on the other hand, use objective criteria so that the law, and only the law, determines winners and losers. When Chief Justice John Roberts had his hearing before the Senate Judiciary Committee in 2005, he compared judges to umpires. A good umpire knows that he did not make the rules, and he applies them impartially rather than manipulating the rules so that his favorite team wins.

During the same hearing, Sen. Ted Kennedy, D-Mass., asked Roberts “whose side will you be on” in certain kinds of cases. In other words, he wanted a Supreme Court nominee to announce, under oath, who he would side with in cases he had not yet considered.

This, of course, is the opposite of impartiality. It’s also the opposite of the oath for federal judicial office, by which a judge promises to “administer justice without respect to persons, and do equal right to the poor and to the rich, and … impartially discharge and perform all the duties incumbent upon me.”

So back to the judicial job description. Our system of government separates making the law from interpreting the law. Impartial judges respect that separation, while political judges ignore it.

The central question in the judicial appointment process must be whether a nominee will be an impartial or a political judge. The success of our system of government depends on the right answer.