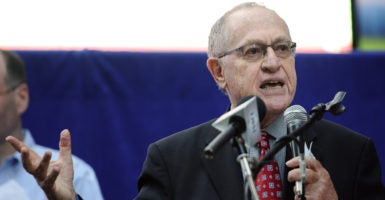 “President Trump, you know, I’ve been defending your civil liberties and will continue to do so on this show but you have to end this policy of separating parents from children,” says Alan Dershowitz. “Not because of the parents but because of the children. It imposes a trauma on the children. It’s just unacceptable. It’s just not proper.” (Photo: Anthony Behar/Sipa USA/Newscom)

Dershowitz’s comments come after ex-CIA chief Michael Hayden tweeted a photo of Auschwitz Saturday and doubled down on the tweet while appearing on CNN’s “New Day” Monday morning.

“Michael Hayden is a great man. He was a great public servant,” Dershowitz said on Fox News. “But I think making comparisons to death camps and concentration camps is a form of Holocaust denial.”

Other governments have separated mothers and children pic.twitter.com/tvlBkGjT0h

Dershowitz also cautioned President Donald Trump against continuing with the administration’s current policy on illegal immigration and urged the commander in chief to step in.