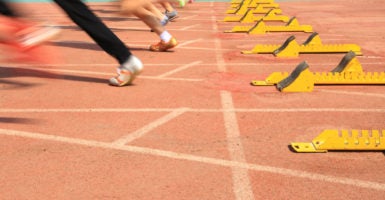 Two athletes who were born males placed first and second in state track championship events for high school girls, causing anger among other competitors and parents who say they had an unfair advantage over the girls.

Both Miller and Yearwood are biological males who identify as females. Neither has undergone surgeries or used hormone blockers to lower their testosterone to a level comparable to females.

The Connecticut Interscholastic Athletic Conference allows athletes to compete according to their gender identity and implements no hormone testing, as regulatory bodies do at the university level.

Athletes must possess school records identifying them as their chosen gender, and those records must be verified by school officials to make sure the gender identification is made in good faith rather than to gain an unfair advantage.

Parents began a petition after Yearwood took first place in the women’s 100-meter dash for the second consecutive year in early June, calling on the Connecticut Interscholastic Athletic Conference to change its policies that allow athletes to compete according to their gender identity, the Hartford Courant reported.

The petition has garnered hundreds of  signatures, and parents and athletes began to clamor more loudly after Miller and Yearwood swept the races.

“I think it’s unfair to the girls who work really hard to do well,” Glastonbury sophomore sprinter Selina Soule said.

She said she doesn’t think it’s fair for boys who identify as girls to race with girls when boys are faster and stronger than girls.

Medical research shows 80 to 95 percent of children outgrow gender dysphoria naturally and accept their biological sex if nature takes its course. No long-term, randomized study on the effects of hormone-blocking treatments on children has been conducted, and no laws govern or regulate use of hormone blockers.