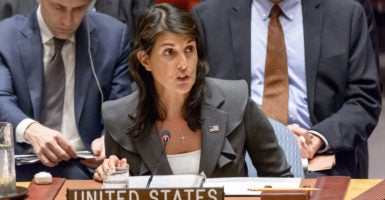 U.S. Ambassador Nikki Haley is seen during a United Nations Security Council meeting regarding the situation in Gaza at U.N. headquarters in New York on June 1. (Photo: Albin Lohr-Jones/Sipa Usa/Newscom)

“The nature of this resolution clearly demonstrates that politics is driving the day,” Haley said at the U.N. General Assembly on Wednesday, according to The New York Times. “Such one-sided resolutions at the U.N. do nothing to advance peace between Israel and Palestinians.”

A U.S. amendment to condemn Hamas, a Palestinian Islamist group that governs the Gaza Strip on Israel’s border, failed Wednesday when it garnered a simple majority but fell short of the two-thirds vote needed. The resolution that passed did not even mention Hamas, which has fired more than 100 rockets at Israel.

RT @USUN: Today more countries at the UN voted for a US effort to hold Hamas accountable in Gaza than voted against. pic.twitter.com/fOd5db5bIP

The resolution comes after Palestinian fighters broke a de-facto truce between Israel and the Gaza Strip by launching two rockets at Israel on June 2. The truce served as a short respite after an outbreak of violence in May that rivaled the intensity of the 2014 war between Israel and Gaza that left more than 2,000 dead. Gaza, which is populated by Palestinian Arabs, has been ruled by Hamas since 2007.

Although many members of the U.N. General Assembly supported the resolution sponsored by Arab and Islamic nations, others working for the U.N. see the conflict between Israel and Gaza differently.

U.N. Middle East peace envoy Nickolay Mladenov of Bulgaria tweeted, “It is UNACCEPTABLE to indiscriminately fire at civilian communities! I am deeply concerned by today’s rockets fired by Palestinian militants towards Southern Israel, one of which hit close to a kindergarten. Such actions undermine efforts to improve the situation in Gaza,” during a flare-up in the conflict on May 29.