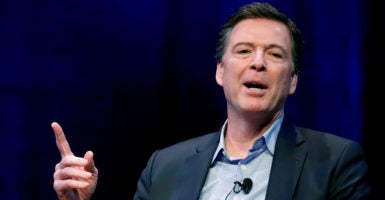 A review of the FBI probe of Hillary Clinton’s email scandal found no evidence that political bias affected the probe, but that many actions “cast a cloud” over the outcome that spared her from prosecution.

The long-awaited, 568-page report by the Justice Department’s Office of Inspector General notes political commentary in text messages by five FBI officials. But, it says, “our review did not find evidence to connect the political views expressed in these messages to the specific investigative decisions that we reviewed.”

While President Barack Obama’s first secretary of state from 2009 through 2012, Clinton conducted official business using a private, unsecured email account and server, rather than the required government communications system.

The investigation of Clinton’s email practices overseen by then-FBI Director James Comey concluded that she had been “extremely careless” in handling classified information, but determined that she didn’t do so intentionally.

Clinton, the Democrats’ 2016 presidential nominee, has blamed the investigation and Comey for her election loss to the Republicans’ nominee, Donald Trump.

Justice Department Inspector General Michael Horowitz announced he would look into the FBI’s Clinton probe in January 2017. His report examines whether investigative decisions were political or otherwise improper, and determines that “these judgment calls were not unreasonable.”

Horowitz’s report says it would not second-guess the FBI’s conclusions in the Clinton email investigation, but examine only that investigation itself.

White House press secretary Sarah Huckabee Sanders, speaking to reporters after the release of the report Thursday afternoon, said it reinforces Trump’s suspicion of bias in the FBI.

Here are four major takeaways from the inspector general’s report.

Horowitz did not conclude that Comey had an agenda in publicly announcing the decision not to seek a prosecution of Clinton in July 2016, and then announcing days before the Nov. 8 election that the FBI had reopened the investigation.

“We found that it was extraordinary and insubordinate for Comey to do so, and we found none of his reasons to be a persuasive basis for deviating from well-established Department policies in a way intentionally designed to avoid supervision by Department leadership over his actions,” the report says.

Comey told Horowitz’s investigators that in April 2016, he told then-Deputy Attorney General Sally Yates that “the closer they got to the political conventions, the more likely he would be to insist that a special counsel be appointed, because he did not believe the department could credibly announce the closing of the investigation once Clinton was the Democratic Party nominee.”

But, the report says, Comey likely wanted only to “induce” the Justice Department to move more quickly in completing the investigation.

Comey explained why he acted outside the chain of command, according to the report:

Comey told the OIG [Office of the Inspector General] that a separate public statement was warranted by the ‘500-year flood’ in which the FBI found itself, and that he weighed the need to preserve the credibility and integrity of the Department and the FBI, and the need to protect ‘a sense of justice more broadly in the country—that things are fair not fixed, and they’re done independently.’

The exchange of electronic text messages in which FBI official Peter Strzok and a colleague, FBI lawyer Lisa Page, expressed pro-Clinton and anti-Trump sentiments already was known because it came out during Horowitz’s investigation.

However, his report specifies a previously unknown, shocking statement coming from an FBI official during a presidential election campaign.

On Aug. 8, 2016, Page asked Strzok in a text message whether Trump would win the presidential election that was three months away.

Congress previously released texts in which Strzok wrote about an “insurance policy” in the unlikely event that Trump won the election.

Strzok reportedly was involved in changing Comey’s language in the draft Clinton findings, softening the characterization of her email practices from “grossly negligent,” which implies strong legal culpability, to “extremely careless.”

The inspector general’s report refers to the Clinton email probe as the “Midyear Exam,” as the FBI and Justice Department did. It says the August 2016 text from Strzok to Page seemed to refer to the investigation of Trump campaign ties to Russia, which the FBI had begun as a counterintelligence probe the previous month:

Most of the text messages raising such questions pertained to the Russia investigation, which was not a part of this review. Nonetheless, the suggestion in certain Russia-related text messages in August 2016 that Strzok might be willing to take official action to impact presidential candidate Trump’s electoral prospects caused us to question the earlier Midyear investigative decisions in which Strzok was involved, and whether he took specific actions in the Midyear investigation based on his political views.

After the first batch of Strzok-Page text messages came to light, special counsel Robert Mueller booted Strzok from his investigation of allegations of collusion between the Trump campaign and Russian officials.

Asked Thursday whether Trump believes Strzok should still have a job, Sanders, the White House press secretary, said: “I haven’t specifically asked him that question, but my guess would be no.” 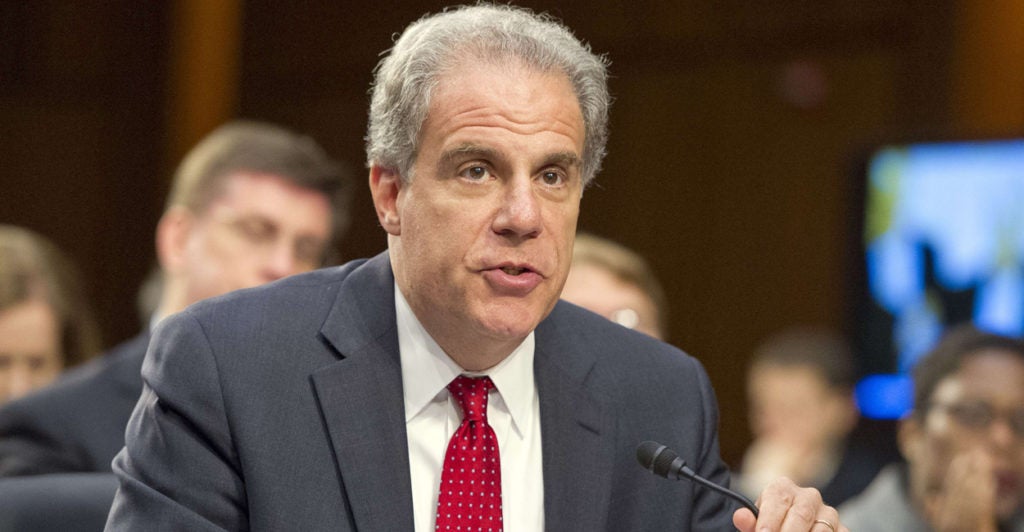 The report also delved into Lynch’s meeting June 27, 2016, with the Democratic nominee’s husband, former President Bill Clinton, on the attorney general’s plane as it sat at an airport in Arizona.

While the two said publicly that they didn’t speak about the email investigation, a visit to the attorney general by the husband of the subject of an FBI investigation raised suspicion.

Just days later, Comey announced that he wouldn’t recommend a prosecution of Clinton.

“Lynch told the OIG that she became increasingly concerned as the meeting ‘went on and on,’ and stated ‘that it was just too long a conversation to have had,’” the inspector general’s report says.

The report found fault with the appropriateness of the Lynch-Clinton meeting, but found no evidence that it had an effect on the FBI investigation of Clinton’s wife:

Although we found no evidence that Lynch and former President Clinton discussed the Midyear investigation or engaged in other inappropriate discussion during their tarmac meeting, we also found that Lynch’s failure to recognize the appearance problem created by former President Clinton’s visit and to take action to cut the visit short was an error in judgment. We further concluded that her efforts to respond to the meeting by explaining what her role would be in the investigation going forward created public confusion and did not adequately address the situation.

Comey later cited the meeting as one of his reasons for making the announcement about the FBI’s findings in the Clinton probe without including Lynch.

The report cites “troubling lack of any direct, substantive communication” between Comey and Lynch before Comey’s July 5, 2016, press conference or before his Oct. 28, 2016, letter to Congress about reopening the probe because of newly discovered emails.

“We found it extraordinary that, in advance of two such consequential decisions, the FBI director decided that the best course of conduct was to not speak directly and substantively with the attorney general about how best to navigate those decisions,” the report says.

Lynch previously had said she would go along with Comey’s recommendation in the Clinton matter.

The inspector general’s report says the FBI’s interview with Hillary Clinton took place with two other people present who were questioned separately in the investigation–Cheryl Mills and Heather Samuelson, the former a longtime aide and both her attorneys.

The only way the FBI could require Clinton to testify alone would be before a grand jury, the report says.

“We found that one of the reasons for not using the grand jury for testimony involved concerns about exposing grand jurors to classified information,” the report says.

The report cited a lack of “persuasive” proof that this unusual approach to questioning, which was not recorded, either biased or hindered the probe of Clinton’s email practices:

We found no persuasive evidence that Mills’s or Samuelson’s presence influenced Clinton’s interview. Nevertheless, we found the decision to allow them to attend the interview was inconsistent with typical investigative strategy.

However, Horowitz reiterates earlier reports that the FBI already appeared to have made its decision before interviewing Clinton in the “Midyear” case.

“We found that these decisions were occurring at a time when Comey and the Midyear team had already concluded that there was likely no prosecutable case,” the report says.