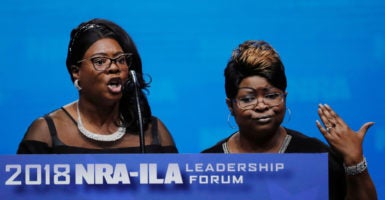 "The message [Diamond and Silk] received on April 5, 2018, that characterized their page as ‘dangerous’ was incorrect and not reflective of the way we seek to communicate with our community and the people who run Pages on our platform," says Mark Zuckerberg. Pictured are Lynnette "Diamond" Hardaway, left, and Rochelle "Silk" Richardson. (Photo: Lucas Jackson/Reuters/Newscom)

Facebook co-founder and CEO Mark Zuckerberg admitted Monday that his company “mishandled” the controversy of labeling Diamond and Silk—two popular conservative personalities—“dangerous” and “unsafe to the community” in early April.

Facebook restricted the two conservative social media personalities on its platform on April 5 after being given the labels. The two are highly popular on Facebook for making pro-President Donald Trump videos and shattering racial and gender stereotypes.

“We mishandled communication with Diamond and Silk for months,” Zuckerberg said in a response to Congress that was released on Monday, two months after his highly publicized congressional testimony. “Their frustration was understandable, and we apologized to them. The message they received on April 5, 2018, that characterized their page as ‘dangerous’ was incorrect and not reflective of the way we seek to communicate with our community and the people who run Pages on our platform.”

“As part of our commitment to continually improve our products and to minimize risks where human judgment is involved, we are making a number of changes,” Zuckerberg added.

The original message Facebook sent to Diamond and Silk on April 5 read: “The Policy team has came to the conclusion that your content and your brand has been determined unsafe to the community. This decision is final and it is not appeal-able in anyway.”

One of the changes Facebook plans to implement is using conservative leaders, including a former Republican senator from Arizona, Jon Kyl, to help audit Facebook for political bias.

“We have engaged an outside adviser, former Sen. Jon Kyl, to advise the company on potential bias against conservative voices,” Zuckerberg said. “We believe this external feedback will help us improve over time and ensure we can most effectively serve our diverse community.”