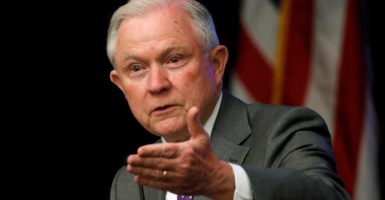 The University of Michigan is the fourth school to have the pleasure of receiving a statement of interest from Attorney General Jeff Sessions' Justice Department. (Photo: Jonathan Ernst/Reuters/Newscom)

The Justice Department has filed court papers against the University of Michigan in a lawsuit alleging the school’s speech policies violate students’ free speech rights.

Following through on a priority of Attorney General Jeff Sessions, the Justice Department  statement of interest filed Monday alleges that the University of Michigan has an “unconstitutional” statement of student rights and responsibilities. The university was sued in May by the nonprofit Speech First, which promotes free speech.

“The United States’ Statement of Interest argues that the University of Michigan’s Statement of Student Rights and Responsibilities, which prohibits ‘harassment,’ ‘bullying,’ and ‘bias,’ is unconstitutional because it offers no clear, objective definitions of the violations,” the Justice Department asserted. “Instead, the Statement refers students to a wide array of ‘examples of various interpretations that exist for the terms,’ many of which depend on a listener’s subjective reaction to speech.”

Sessions’ Justice Department also cited University of Michigan’s bias response team that, according to Speech First, has conducted over 150 investigations into allegations of bias over the past year.

University of Michigan is the fourth school to have the pleasure of receiving a statement of interest from the Justice Department under Sessions. The DOJ previously filed statements in cases involving University of California, Berkeley; Georgia Gwinnett College; and Los Angeles Pierce College.

The school made headlines earlier in 2018 when union-backed professors at its Ann Arbor campus demanded a nearly 200 percent salary increase. University of Michigan also denied a degree and transcript to a student accused of sexual assault, but would not grant him a hearing either.

“Contrary to the Department’s statement, the university’s Bias Response Team does not ‘ha[ve] the authority to subject students to discipline and sanction,’” University of Michigan spokesman Rick Fitzgerald told The Daily Caller News Foundation, linking to a clarification of the definitions. “Rather, it provides support to students on a voluntary basis; it does not investigate claims of bias or discipline students in any way.”

“[University of Michigan] prohibits ‘harassing’ and ‘bullying,’ but the definitions of those terms have just been streamlined and are based on provisions of Michigan law that have been upheld by the courts,” Fitzgerald said.