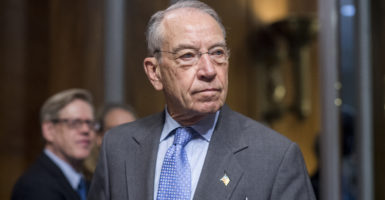 “One of the most egregious loopholes that we need to fix deals with what it means to be 'actively engaged in a farming operation,'" Sen. Chuck Grassley says. (Photo: Bill Clark/CQ Roll Call/Newscom)

Say goodbye to a certain kind of extended family. Sen. Chuck Grassley, R-Iowa, wants to close loopholes in the farm bill to stop lining the pockets of remote landowners and guarantee that working farmers and their immediate families get the government subsidies they are eligible to receive.

Grassley, in a speech Monday at The Heritage Foundation, said he will introduce an amendment to deny taxpayers’ money to off-site landowners who are actually what one supporter calls “FaceTime farmers.”

“One of the most egregious loopholes that we need to fix deals with what it means to be ‘actively engaged in a farming operation,’” Grassley said during the Heritage event, which also featured a panel of experts.

“Under the current law,” the senator said, “a designation called ‘Active Personal Management Only’ allows people who do not work on farms to get farm subsidies of $125,000, or $250,000 for a married couple.”

Grassley’s amendment would tighten restrictions on who receives farm subsidies, boiling down eligibility to only farmers and their immediate families who live and work on the farm.

The Iowa Republican’s proposed amendment aims to close loopholes that analysts say have given 10 percent of American farmers over 70 percent of the subsidies.

Right now, the farm bill, which has been renewed and revised every five years since 1920, has a loophole that allows $250 million in subsidies to flow only to the largest farms. These farm operations then can outcompete younger and beginning farmers, with the Department of Agriculture having no way to make sure those most in need get the help.

“As these farms grow more complex with more partners, it becomes less and less likely that subsidy recipients are actually working on the farm,” said Scott Faber, vice president of government affairs at the Environmental Working Group, who used the phrase “FaceTime farmers” to describe those not actually on the farm.

“So this week,” Faber said, “the Senate Agriculture Committee has a chance to fix this problem by requiring subsidy farm recipients [to] not only have a financial stake in the farm, but also meet a commonsense definition of work.”

Grassley, a farmer himself and member of the Senate’s agriculture committee, has been part of making policy on American farmers for 37 years. He has worked on many farm bills and helped craft the 2014 version of the bill.

A House-Senate conference committee, Grassley said, created “a new loophole to maintain the original loophole that I was trying to close.”

Joshua Sewell, senior policy analyst at Taxpayers for Common Sense, said in the panel following Grassley’s amendment announcement: “I honestly believe that most taxpayers can come to agreement in providing a government-sponsored safety net for households and businesses involved in agriculture.”

Daren Bakst, who writes extensively on farm policy as a senior research fellow in the Roe Institute for Economic Policy Studies at The Heritage Foundation, argues that the farm bill’s redistribution policies are “out of control.”

“A truly conservative farm bill wouldn’t ignore reforming the farm safety net in the farm bill,” Bakst wrote in a recent commentary. “It wouldn’t maintain or expand a safety net that is just a massive wealth transfer from lower-income to higher-income households.”

Grassley, also chairman of the Senate Judiciary Committee, said he expects his new amendment will be introduced on the Senate floor Wednesday, noting it has support from his fellow Republicans but not characterizing support from Democrats.

“We need to get a farm bill that we can justify to the American taxpayers, and I plan on helping to do this by making a few improvements to the farm bill and getting it through the entire Senate,” Grassley said, prompting applause.