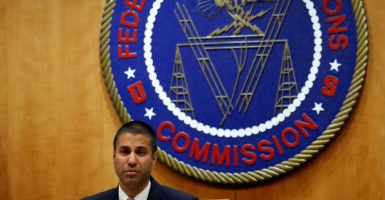 The Federal Communications Commission’s short-lived “net neutrality” rules officially ended Monday, replaced by a measure the agency says will keep the internet open to all while protecting consumers.

In a statement on its website, the FCC said the new regulations “will protect the open internet that consumers cherish while paving the way for better, faster, cheaper internet access.”

James Gattuso, a senior research fellow in The Heritage Foundation’s Roe Institute for Economic Policy Studies, noted that the net neutrality rules were put in place only in 2015, and “the explosion of creativity, innovation, access, and choice on the web began and existed long before that.”

Opponents on the left have predicted numerous negative results for consumers from repeal of the rules, ranging from an inconvenience to an outright catastrophe.

Chances are, you’ve accessed the internet to read this article and so can be glad that one or more of the dire predictions hasn’t come to pass. Here are just seven of them:

1.  Sen. Bernie Sanders I-Vt., said repealing the old rules would mean “the end of the internet as we know it.”

Sanders, a Democrat presidential candidate in 2016, said in a video:

A disastrous decision, it will impact every American. It will give huge advantages to big corporations over small businesses, to big media companies over smaller media outlets. We’ve gotta do everything we can to defeat this thing in the courts, and defeat it legislatively.

This is the end of the internet as we know it. In Congress and in the courts we must fight back. #NetNeutrality pic.twitter.com/ExKx7LFZwj

2. Senate Minority Leader Chuck Schumer, D-N.Y., created a thread on Twitter where he said the FCC’s repeal of net neutrality would limit a couple’s ability to “Netflix and chill.”

Without #NetNeutrality when a couple is streaming their favorite #Netflix show but it keeps lagging and killing the mood, who will be to blame?

3. Schumer also said it would preclude streaming a Yankees game on a cellphone.

[THREAD] Without #NetNeutrality when you’re trying to stream the @Yankees game on your phone and you miss every other pitch, who will be to blame?

4. The Gay & Lesbian Alliance Against Defamation, or  GLAAD, called repeal an “attack” on lesbian, gay, bisexual, and transgender Americans, because “the internet is a lifeline for LGBTQ people to build community support networks and access LGBTQ resources on history, suicide prevention, and health.”

The group added that “allowing broadband providers to regulate access is a direct and unconscionable attack on freedom of expression.”

5. Feminist lawyer Sandra Fluke called repeal an attack on “reproductive freedom,” citing the National Association for the Repeal of Abortion Laws, or NARAL.

Net Neutrality means
Trump can Change The
Internet ??It Will Include LESS AMERICANS NOT MORE??
Now Comcast,AT&T,Google
Will show you ONLY WHAT THEY WANT YOU TO SEE ??SLOWER AND MORE EXPENSIVE AT THEIR WHIM??SEE LESS,CHARGED MORE…