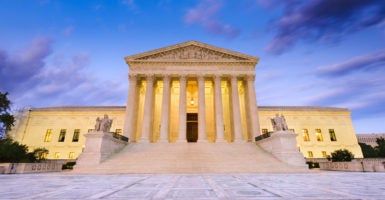 Can a state take reasonable steps to ensure the accuracy of its voter rolls by removing people who have left the jurisdiction?

On Monday, by a 5-4 vote, the Supreme Court answered “yes,” affirming an Ohio law allowing for the removal of voters who have left the state.

The opinion in Husted v. A. Philip Randolph Institute, written by Justice Samuel Alito, and joined by Chief Justice John Roberts and Justices Anthony Kennedy, Clarence Thomas, and Neil Gorsuch, is a major win for voters, who have an interest not only in ensuring that states offer sufficient opportunities to register, but also that they take steps to ensure the integrity of the electoral process.

A critical part of that process is guaranteeing that voter registration records are accurate and up-to-date, a task with which many states seem to be struggling. According to one 2012 Pew study, 24 million voter registrations nationwide—one out of every eight—are inaccurate or outdated, and some 2.8 million voters are registered in two or more states.

A study of the voter registration records in just 21 states by the Government Accountability Institute showed that almost 8,500 individuals voted illegally in more than one state in the 2016 presidential election.

Clearly, voter rolls need some cleaning up. Lawmakers in Columbus set out to do just that, adopting a state law creating a mechanism to remove voters believed to have moved out of the state. That process takes six years and several steps to complete.

First, a voter must fail to partake in “voter activity,” including not just casting a ballot but also other actions like signing a petition, for two years. Ohio then mails a pre-stamped, pre-addressed notice to the voter asking that he confirm he is still a resident of Ohio. If the notice is not returned, and the voter fails to cast a ballot in any election over the next four years, state officials may then remove the voter on the grounds that he is no longer a resident.

Unfortunately, even reasonable election integrity policies like this invited the ire of liberal activists, and they took Ohio to court to stop its voter-roll maintenance activities.

In Husted, the challengers claimed that the Buckeye State’s process for maintaining the accuracy of its voter rolls violated two federal voter registration laws: the National Voter Registration Act and the Help America Vote Act.

The National Voter Registration Act sets out the requirements states must meet to remove a voter who is no longer eligible “by reason of … a change in the residence of the registrant” that precludes him from voting in the original jurisdiction. The Help America Vote Act, meanwhile, requires states to undertake a process to purge inaccurate entries.

Under the National Voter Registration Act, in order to remove a voter for nonresidency, a state must either receive written notice from the voter attesting to the move, or the voter must fail to return a card affirming his residency and then fail to vote in the next two federal general elections. The Ohio law was obviously fully in compliance with that provision of the law.

Nevertheless, the challengers in Husted claimed that Ohio ran afoul of the law’s “failure-to-vote clause,” which stipulates that no person can be removed from a voter roll “by reason of the person’s failure to vote” without following the law’s procedures. They asserted, incorrectly, that Ohio’s use of a voter’s failure to vote at two points in its clean-up process—first, to trigger the mailing, and then again during the subsequent four-year period—violated this provision. They also argued that Ohio was removing eligible voters as part of its clean-up process.

The district court rejected both claims, but on appeal, the 6th U.S. Circuit Court of Appeals reversed the lower court, holding that Ohio had indeed violated the National Voter Registration Act.

Now, the Supreme Court has resolved the matter, handing down a victory for Ohio, and for the integrity of American elections.

Alito’s opinion made swift work of the challengers’ claims.

First, Alito noted that Ohio’s process—mailing a notice seeking confirmation of residency, followed by a waiting period encompassing two federal general elections—followed the process prescribed in the National Voter Registration Act “to the letter.” In fact, he wrote, “[n]ot only are states allowed to remove registrants who satisfy these requirements, but federal law makes this removal mandatory.”

Next, the court rejected the claim that Ohio ran afoul of the failure-to-vote clause, concluding that the law “simply forbids the use of nonvoting as the sole criterion for removing a registrant”—something Ohio does not do. Rather, nonvoting is treated as evidence of nonresidency, but is not itself sufficient to result in removal from the voter roll.

This is exactly how Congress intended nonvoting to be used. Not only did it make it part of the requirements prescribed in the National Voter Registration Act for removal, it subsequently included provisions in the Help America Vote Act specifying that no one could be removed “solely” for this reason, and amended the original failure-to-vote clause to specify that it “may not be construed to prohibit a state from using” the procedures on which Ohio based its law.

Adopting the challengers’ argument would have led to a bizarre reading of the statute in which it would be illegal for any state to adhere to the National Voter Registration Act’s own requirements. “Congress could not have meant for the failure-to-vote clause to cannibalize” the other provisions of the law.

In fact, as Thomas pointed out in his concurrence, reading the statute the way the challengers claimed “would seriously interfere with the state’s constitutional authority to set and enforce voter qualifications.” Such an interpretation would render the National Voter Registration Act unconstitutional.

Justices Stephen Breyer, Ruth Bader Ginsburg, Sonia Sotomayor, and Elena Kagan dissented, arguing that Ohio violated the National Voter Registration Act’s requirement that a state make “a reasonable effort to remove the names of ineligible voters” because “failure to vote is not a reasonable method for identifying voters whose registrations are likely invalid.”

Alito rejected this claim, pointing out that it is not for the “federal courts to go beyond the restrictions” in the law and “strike down any state law that does not meet” the justices’ arbitrary conceptions of “reasonableness.” Policy judgments like these are properly addressed not in court, but in Congress. And Congress determined when it passed the National Voter Registration Act that a failure to vote after receiving a written notice from the state is, in fact, a “reasonable method” for identifying voters who have moved out of state.

Hopefully, this opinion will spark a new wave of state interest in adopting modern measures and using new technologies designed to remove ineligible voters from the rolls. So long as voter registrations remain an area rife with inaccuracy, states invite the potential for fraud and risk damaging faith in the electoral process itself.