From Tolerance to Celebration: How Corporations Impose Sexual Orthodoxy 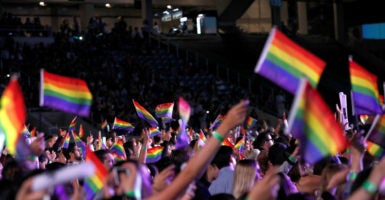 Some in the crowd wave flags to celebrate LGBT Pride Month during the Wango Tango concert June 2 at Banc of California Stadium in Los Angeles. (Photo: Mario Anzuoni/Reuters/Newscom)

Alexa Secrest is a member of the Young Leaders Program at The Heritage Foundation.

June is Pride Month for many lesbian, gay, bisexual, and transgender Americans, and popular fashion retailer J. Crew has collaborated with the Human Rights Campaign to create a clothing collection to support the “fight for equality.”

The clothing includes adult and children’s socks, T-shirts, and a tote bag, and depicts rainbow-printed slogans such as “Love First” and “Love to All” as well as the yellow equal sign logo of the Human Rights Campaign, one of the nation’s largest advocates of the LGBT political agenda. The items come in sizes for children as young as 2.

J. Crew says it will donate 50 percent of the purchase price of items in the collection to HRC. In addition, J. Crew stores nationwide reserved June 9 as a day of “LGBTQ pride” celebration on which customers could “share the love” or “get ready for a parade” with free flags and temporary tattoos.

J. Crew is a private company that has the right to partner with any organization. But it is part of a growing trend in corporate America of household brands that promote illiberal legislation to undermine the First Amendment.

In the name of promoting “tolerance” for some customers, these corporations erode the freedoms of others.

The Human Rights Campaign, or HRC, spearheads efforts to pass state and federal legislation that would limit the constitutional freedoms of those who believe in marriage between a man and a woman, a belief that has been held by people around the world for millennia.

In Congress, the Human Rights Campaign leads the charge to pass the Equality Act, a bill that would add both “sexual orientation” and “gender identity”  to the Civil Rights Act, the Fair Housing Act, the Equal Credit Opportunity Act, the Jury Selection and Services Act, and several other laws regarding employment with the federal government.

If passed, the Equality Act would impact a broad spectrum of private businesses by adding “sexual orientation” and “gender identity” to laws prohibiting discrimination in public accommodations. Although the original purpose of such laws during the civil rights movement was to shield racial minorities from invidious identity-based discrimination, LGBT activists seek to abuse these laws by turning them into swords to punish people whose religious beliefs teach that marriage is between a man and a woman.

This is precisely how the state of Colorado used its law to punish bakery owner Jack Phillips for creating custom cakes only for occasions and messages that align with his traditional Christian beliefs, and not for a same-sex wedding or a divorce celebration.

Tim Gill, who has poured $422 million of his fortune into legislative campaigns to insert sexual orientation and gender identity into antidiscrimination laws, candidly admitted in Rolling Stone magazine that he is doing so to “punish the wicked.” That is, those who disagree with his view of marriage and sexuality.

Gill and the Human Rights Campaign have succeeded in passing such “SOGI” measures in 21 states and the District of Columbia. The HRC also enlisted the support of corporate America to try to limit Phillips’ First Amendment freedoms at the Supreme Court.

J. Crew’s Pride Month collaboration with the Human Rights Campaign will fund national legislation to empower LGBT activists to leverage the power of government to punish millions of Americans for living according to their religious beliefs.

And even after its campaign is over, J. Crew’s support of the Equality Act will continue channeling money from customers into legislation that will reduce their freedoms.

Jim Brett, CEO for J. Crew Group Inc., has said that the brand is committed to doing what it can to help bring about “a more inclusive world.” But by supporting the Human Rights Campaign and, in turn, the Equality Act, J. Crew is furthering the exclusion of its orthodox Muslim, Jewish, Catholic, and Protestant customers from public life.

HRC President Chad Griffin has boasted of being able to form coalitions of major businesses, including Walmart Inc., to defeat religious freedom protections for citizens in Indiana and Arkansas.

J. Crew’s Pride Month campaign also helps market homosexuality and animus toward orthodox religious believers. For instance, images of same-sex couples, children, and a celebrity are used to market the attire. Each photograph is accompanied by a quote relating to “love” or “pride.”

Actor and producer Evan Jonigkeit responds to the question “What does Love First mean to you?” He says: “It’s about setting aside your preconceived notions about any particular individual and working from a place of empathy.”

Such advertising advances the false notion that anyone opposing the Human Rights Campaign and its mission is not only narrow-minded but cold-hearted and unfeeling. In reality, many moral and legal reasons exist to oppose the HRC’s agenda, none of which involve bigotry or hatred.

It is no coincidence that corporate America prioritizes the LGBT agenda over the freedom to live according to one’s religious beliefs about marriage.

The Human Rights Campaign publishes an annual ranking of corporations according to their public support for “SOGI” legislation, including the Equality Act.

In 2017, J. Crew received a relatively low score of 20 percent. But through its Pride Month collection, the company may be able to boost that score.

Of course, any and all customers may refrain from purchasing the merchandise, or tell J. Crew to focus on its product line rather than on promoting illiberal causes. Customers also may tell the company to stop pressing the new sexual orthodoxy on them and their children.

But, as both children and adults model J. Crew clothing, the Human Rights Campaign’s intolerant message will spread to multiple generations of Americans, no matter how low or high the company’s sales are.

Unfortunately, J. Crew is now only one of many large corporations whose cultural cronyism undermines their customers’ freedoms, and uses their own money to do it.