6 Big Questions About What Comes After the Trump-Kim Meeting 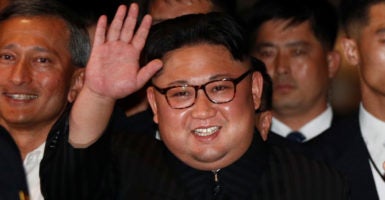 Amid intense attention to the historic meeting between President Donald Trump and North Korean dictator Kim Jong Un, optimists and skeptics alike have questions about the next step.

The two leaders’ meeting in Singapore was not expected to reach a major breakthrough.

Secretary of State Mike Pompeo said last week the administration would seek progress toward a formal treaty to be ratified by the Senate.

That would make it more difficult for a future president to unravel a deal, as Trump unraveled President Barack Obama’s Iran nuclear deal. It also would provide assurance to Kim that the United States won’t pursue regime change after his country does away with its arsenal.

A treaty also means contentious debate abroad and at home.

“It will really have to be substantial, with almost everything we hoped for, to get Senate confirmation,” Alexander Vershbow, ambassador to South Korea from 2005 to 2008, told The Daily Signal. “If they draw up a treaty, the Senate will want it airtight.”

Here are the six of the big questions remaining:

1. How to Define ‘Denuclearization’?

U.S. experts agree that Trump must stand firm on some version of this in an agreement that would guarantee Kim remains in power and lifts economic sanctions on the communist regime.

“The president can’t walk away from the Iran deal and then reach a deal with North Korea that isn’t verifiable and irreversible denuclearization,” retired Army Lt. Gen. Jerry Boykin, a former deputy undersecretary for intelligence at the Defense Department, told The Daily Signal.

“We need to let Kim know that we consider his nuclear program an existential threat to the United States and are willing to use all available means to oppose it,” Boykin said. “Kim will relay to the president that he needs a security guarantee to let the nuclear arsenal go, so he is secure the United States is not interested in regime change.”

However, the guarantee that the U.S. will not support regime change may not be enough, Vershbow said.

“Some people believe Kim may have had his Deng Xiaoping moment,” said Vershbow, the former ambassador, referring to the communist China leader who succeeded the more brutal Mao Zedong and brought market reforms while maintaining authoritarian rule.

“But the official ideology is that they must rule over all of Korea and that the South is illegitimate,” Vershbow said. “The question is how different will Kim Jong Un be from his father and grandfather?”

Defining denuclearization will be a major difficulty, said Bruce Klingner, a former Korea expert with the CIA who is senior research fellow for northeast Asia at The Heritage Foundation.

“This should include short-range and medium-range ballistic missiles that threaten allies South Korea and Japan,” Klingner said in a public statement. “North Korea has demonstrated for decades that [it] has vastly different definitions of such terms as denuclearization and even what comprises the ‘Korean Peninsula.’”

2. What Language Is Needed for a Long-Term Deal?

In any agreement, North Korea must “publicly, explicitly, and unequivocally accept and commit to work toward the U.N.-required abandonment” of its nuclear, biological, and chemical weapons programs, Klingner said.

“Any new agreement with North Korea has to be very specific and go beyond what has been written in the past,” he said. “It should be similar to the carefully crafted text, with robust verification requirements, of arms control treaties with the Soviet Union and Warsaw Pact rather than the vague text of previous agreements with North Korea.”

In the six-party talks joint statement from September 2005, North Korea pledged nonproliferation of nuclear weapons and to grant access to the International Atomic Energy Agency.

“The Democratic People’s Republic of Korea (North Korea) committed to abandoning all nuclear weapons and existing nuclear programs and returning at an early date to the treaty on the nonproliferation of nuclear weapons and to IAEA safeguards,” the statement said.

Vershbow came to his job at a time when the six-party talks seemed promising, only to have North Korea—then under the rule of Kim Jong Il—back out and restart nuclear testing.

“I’ve seen this movie before, but it might have a different ending this time, one that confounds the skeptics,” Vershbow said of the Singapore summit.

3. Will US Troops Leave South Korea? If So, When?

The current Kim regime wants the United States to withdraw its troops from South Korea.

“Removing U.S. troops from South Korea is not something we can agree to upfront. For many South Koreans, that is a big concern,” said Boykin, the retired lieutenant general who is now executive vice president of the Family Research Council, a conservative advocacy group.

Experts contend this will create a significant concern for U.S. allies in Asia, and the Trump administration should reach an agreement on other issues before talking about troops in South Korea.

“If the North demands, and the U.S. agrees, to take away U.S. forces from South Korea, the allies in Asia such as Japan and Singapore will question whether the U.S. is committed to this part of the world,” Matthew Heiman, a lawyer formerly with the national security division of the Justice Department, told The Daily Signal.

4. How Will Sanctions Relief Work?

“There [is] a combination of fear from the Trump military threats and the tighter sanctions that got Kim’s attention,” Vershbow said.

No sanctions relief should come before North Korea makes a significant step toward denuclearization, Klingner said.

“An agreement where Kim continues to run the country could be similar to Vietnam and Cambodia,” Heiman said. “These are countries that have economies open to the world and are enjoying the benefits, but still have communist dictatorships.”

The young North Korean leader perhaps realizes an agreement is needed for his government and country to survive, said Lester Munson, former staff director of the Senate Foreign Relations Committee, where he negotiated committee priorities with the White House.

“Clearly the current model is not sustainable long term,” Munson told The Daily Signal. “This country has had this system for 65 years. The norm for these types of oppressive regimes to survive is 70 years.”

5. What Must US Expect on Human Rights?

Trump administration officials said human rights haven’t been a focus of early talks, but experts say these matters will have to be addressed before any final agreement.

“How do we not defend our values in a negotiation like this if we guarantee security to a despot with a record of doing terrible things to his people?” Munson said. “That is not a place we want to be. Human rights has to be part of any agreement. We cannot turn a blind eye to that.”

North Korean prison camps contain between 80,000 and 120,000 prisoners, according to a report by Olivia Enos, policy analyst for Asian studies at The Heritage Foundation. Enos is in Singapore.

Trump addressed North Korea’s horrible human rights abuses during speeches at the South Korean National Assembly, during the State of the Union, and when meeting with escapees from North Korea.

6. What Role Will China Play?

China could play a constructive or destructive role in the negotiations, and Kim might enjoy playing the two superpowers against one another.

Heiman, the former Justice Department national security lawyer, said he wouldn’t compare the meeting with Nixon and Mao, but said China could have a critical impact.

“China parted with the Soviets and became more aligned with the U.S.,” Heiman said of the result of the U.S. opening trade with China. “This meeting could move North Korea closer to the U.S. than China. For the Trump team, the primary goal is denuclearization. But the secondary goal has to be a strategy of a Chinese disadvantage.”

Heiman said it’s to China’s advantage to keep a stable North Korea that poses a nuclear threat to U.S. allies Japan, South Korea, and other competitors in Asia.

However, Boykin said he believes that ultimately China will be on board.

“China does not want a unified Korea that is aligned with the West, but they don’t want war on the peninsula,” Boykin said. “That would only end one way. Kim would be dead and North Korea would be occupied by the U.S. military, with the potential threat, as in the 1950s, of a conflict with China.”