Tucker Carlson, host of the popular Fox News show “Tucker Carlson Tonight,” spoke to Daily Signal Editor-in-Chief Rob Bluey at The Heritage Foundation’s 41st annual Resource Bank meeting in Fort Lauderdale, Florida. Carlson received the prestigious Salvatori Prize, recognizing his work to uphold and advance the principles of America’s founding. The full video, plus an edited transcript of the interview, is below.

Rob Bluey: It is a true honor to celebrate the work that you’ve done, and I want to begin with the advice that you left this audience on how conservatives can take back the culture. You had two pieces of advice. Tell us about them.

Tucker Carlson: Well, have more children. I grew up in a world where it was considered embarrassing to have more than two children. I don’t think that’s the case now among middle-class, upper middle-class people, but it was.

If you don’t like the direction of the country, have children, raise them the way that you want, consistent with your beliefs.

First of all, it’s the most rewarding, greatest, most fun thing you can do. But it’s also the most profound thing. If you don’t like the direction of the country, have children, raise them the way that you want, consistent with your beliefs. It seems like all the answers are basic, nature-based answers, in my opinion. To everything. That’s the most basic of all, have more kids. Raise decent children.

And the second was just say what you think is true. I don’t actually think you get a ton out of confronting people and getting in people’s faces. I don’t think you’re going to convince anybody that way. But I think there’s inherent value in speaking principle out loud without shame or fear. And again, without the expectation that you’re going to win people over right away, because most times you’re not going to.

Aggression really doesn’t help much. I’ve definitely concluded that after years of being aggressive. But I think telling the truth is an inherently valuable act.

Bluey: You’ve had tremendous success with your show. It’s highly rated and millions of people are tuning in. How does that last point inform the work that you do on a day-to-day basis?

Carlson: The show’s successful because it’s on Fox News, which is successful. I’ve worked at a lot of different TV networks, and the network is what matters most.

I don’t imagine that my show is successful because I’m so great. I do think much more about what I say because there’s a bigger audience and because we’re in the middle of this revolutionary moment, and I’m counterrevolutionary.

I don’t say a lot of things without thinking them through, which is good. I mean, occasionally I do and get in trouble for it. But I really try to think through what I really believe and what I really think is true.

Congrats to my friend @TuckerCarlson, recipient of this year’s prestigious Salvatori Prize. We’re grateful for all you do to bring the truth to millions of Americans! pic.twitter.com/abKYnW5GYE

Bluey: But I’d say the topics you cover and the way that you conduct your questioning is different and unique from other TV hosts.

Carlson: Well, I don’t have a lot to add. I would just say two things. I think President Trump is interesting, and I agree broadly with his agenda. I certainly agree with immigration, that’s for sure. But I don’t think that every story is about Donald Trump, and most other people at the other networks think every story is about Trump.

I don’t want to talk about Trump five hours a week, I just don’t. And not because I have some political agenda and it’s bad to talk about; I’m just not that interested, actually.

The second thing is, I really try to have an honest conversation. By the way, my mind occasionally changes. There are a bunch of topics, several topics, where I’ve totally changed my views because someone else had a better point than I did. And I love that. 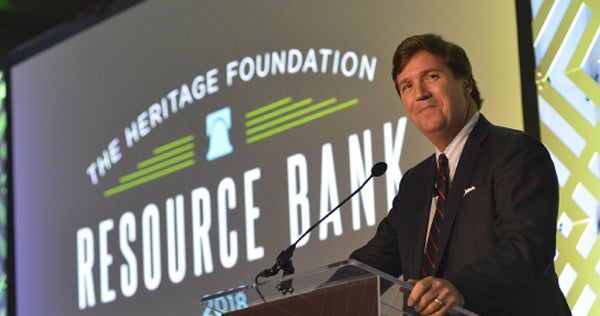 Bluey: You have a book coming out this fall called “Ship of Fools.” I want to hear about it because it relates a bit to Trump, right? I mean, you’re going after the elites, the ruling class.

Carlson: The book, like the show, is based on the most obvious questions. I’m not a super-clever person, I try to keep it very simple. Why would America elect Donald Trump president?

And the explanation in Washington is, well, they didn’t really. Putin did. Or voters were just so dumb, they didn’t know the difference. Or America’s racist, so they elected a racist. Those are contemptible nonexplanations. Those are stupid.

The real answer, obviously, is that people were so dissatisfied with the leadership in place as of the first Tuesday in November of 2016, that they decided to punish them by electing Trump.

Trump is the result of decades of unwise, selfish, and stupid leadership. It’s so obvious. I’m not a genius, I’m hardly a genius. It’s just so clear, and no one says that. I’m not sure why.

This was a referendum on the ruling class; and by the way, we have a ruling class, and I’ve lived in it most of my life, so I know it’s real. It’s not a conspiracy, but we have a class system, increasingly, in this country.

The people in charge have done a really bad job on the big things, on foreign policy and the economy; and they’ve gotten us into a number of counterproductive wars. That was a bipartisan effort. It was started by Bush, but it was applauded by Clinton. So it wasn’t one party, it was both parties.

They made a bunch of assumptions about the economy that turned out to be wrong, and they helped destroy the American middle class, and then they don’t care. So they’re terrible. They’re deeply unwise and selfish and stupid.

Trump is the result of decades of unwise, selfish, and stupid leadership. It’s so obvious. I’m not a genius, I’m hardly a genius. It’s just so clear, and no one says that. I’m not sure why.

Tucker's new book #ShipOfFools is now available for preorder! Click the link below to be one of the first to read! #Tucker @FoxNews https://t.co/KGUHDYbzpB pic.twitter.com/tj2chLJMVJ

Bluey: So, 500 days in, how has Trump changed both Washington and our country?

Carlson: He’s certainly made the divisions clear, which was always his role. Trump is whatever the opposite of a technocrat is; it’s Donald Trump. He’s not a detail man, to put it mildly.

He hasn’t swept into town with the “Mandate for Leadership” that Heritage produced in 1980 to guide the Reagan transformation of Washington. Here is how you handle every department of government. There’s nothing like that. And that really wasn’t the point. One hopes that there will subsequently be someone like that, but that’s not Trump’s role.

Actually, it’s not a contest between left and right so much as it’s a contest or a struggle between people who’ve benefited from the way things were going—me and all my neighbors—and everyone else who has gone backward, particularly economically.

If I could just say, the one sort of sin that conservatives like me committed was not paying attention to the massive transfer of wealth upward, and the stagnation in the middle. We thought that income inequality was something that you weren’t supposed to talk about, or you only cared about if you were Bernie Sanders and against capitalism. I’m totally for capitalism, but that’s bad.

You don’t want to live in a country where a small group of people control everything because you will have a revolution, and the system will be destroyed. Conservatives missed that and liberals were benefiting from it, so they didn’t say anything. That’s what the book’s about.

Bluey: You brought up Bernie Sanders and the left, and we’re having a conversation right now about whether we’re going to have a huge wave of progressives come into Congress next year. What is the left’s end game in view?

Carlson: The end game is always the same, which is to take back power. And Trump is offensive to them probably for a bunch of reasons, but the core offense is taking power away from them, disempowering the technocratic class.

Trump’s weird kind of unintentional political genius is to drive his opponents crazy.

So the point always is to take back control. But below that, a bunch of different things are going on. And politically, I think it’s pretty obvious now there’s no actual agenda. It’s not like they’re mad about trade.

But then do they really want to be on the side of no borders, or calling ICE the stormtroopers, or defending Salvadoran gang members? Like, what?

He’s driven them crazy, and how does that work itself out? I don’t really know, it’s amazing to watch it, though, I’ll tell you that. 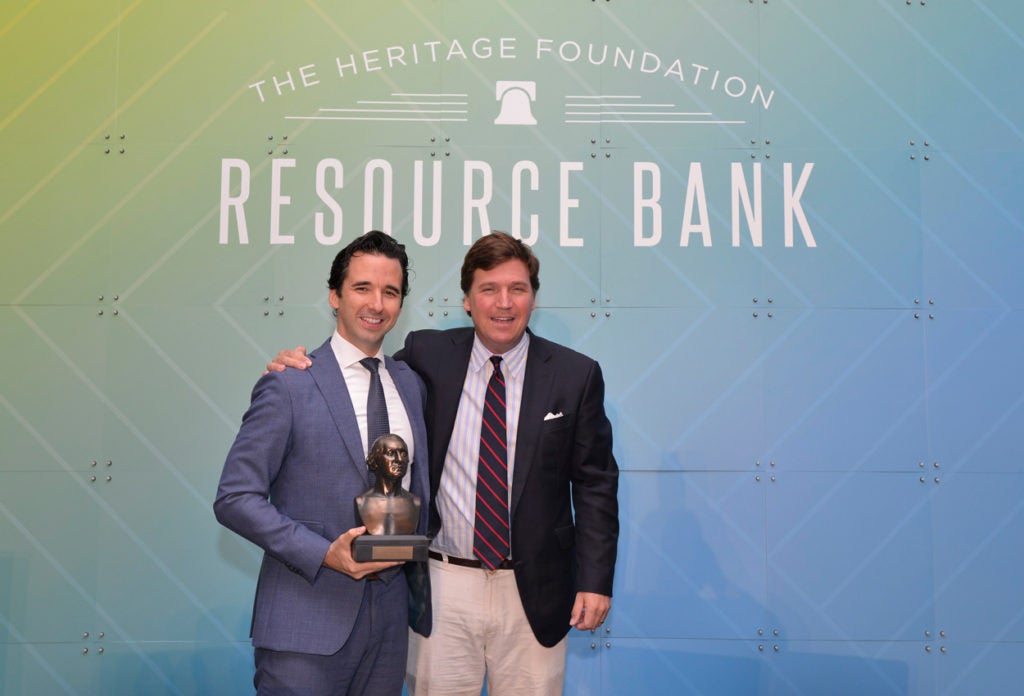 Fox News host Tucker Carlson received the prestigious Salvatori Prize, recognizing his work to uphold and advance the principles of America’s founding. The award was presented by The Heritage Foundation’s David Azerrad, director of the B. Kenneth Simon Center for Principles and Politics and AWC Family Foundation fellow. (Photo: Ivan Apfel Photography for The Heritage Foundation)

Bluey: It sure is amazing to watch. Tucker, finally, I want to ask you: You started your career at The Heritage Foundation as a writer for Policy Review. Here you are today receiving the Salvatori Prize. What does it mean to you to win this high honor?

Carlson: I’ve always been grateful to Heritage for doing the most important thing you can do for a young person, particularly a young man, and that’s give him a job—making $14,000 a year! But no one else was hiring me, and Heritage did.

I’ve always been grateful to Heritage for doing the most important thing you can do for a young person, particularly a young man, and that’s give him a job.

Adam Meyerson, who ran Policy Review, hired me and really kind of systematically taught me journalism. He was conservative, it was a conservative publication. But I actually didn’t write about politics, I wrote about the police and it was kind of nonpolitical. It was more a study in how to gather information, organize it coherently in an expository essay, just the basics. They’re not very complicated, but someone needed to teach me, and he did.

The Heritage Foundation made that possible and I’ve always been grateful for that. I don’t know why they hired me. I wouldn’t have hired me. I was a total loser. But they did, and so I’ve never stopped being thankful for that, ever.

Bluey: We’re so glad it worked out.

Carlson: Thank you. I am too.

Bluey: Make sure you watch his show, “Tucker Carlson Tonight.” Pre-order the book, “Ship of Fools.” Tucker, great to be with you.

Carlson: Great to see you, Rob.