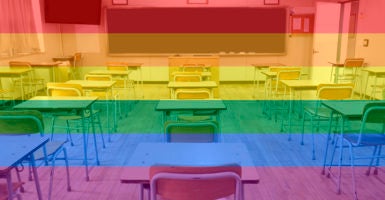 The school previously allowed former Brownsburg High School orchestra teacher John Kluge to call students by their last names but changed the policies two months ago to mandate that Kluge call them by their chosen names and pronouns. (Photo: Getty Images: DONGSEON_KIM)

An Indiana high school teacher alleges that he was forced to resign because he wouldn’t ascribe to the school’s policy of calling transgender students by their chosen names and pronouns.

“I’m being compelled to encourage students in what I believe is something that’s a dangerous lifestyle,” former Brownsburg High School orchestra teacher John Kluge told NBC News. He alleges that compelling him to address students with pronouns that do not accord to their biological sex violates his religious beliefs as well as his constitutional right to free speech.

“I’m fine to teach students with other beliefs, but the fact that teachers are being compelled to speak a certain way is the scary thing,” Kluge also told NBC.

Advocates of queer inclusion at the school and in the community don’t see the requirement as an infringement upon Kluge’s rights but simply as a requirement of respect. “Using a trans student’s chosen name is an invaluable support. Educators need to lead by example with respect for students’ identities, names, and pronouns,” said GLSEN advocacy group education manager Becca Mui, NBC reported.

Calling #transgender students by their correct names is not a matter of "different beliefs". It's a matter of basic respect. #LGBTQhttps://t.co/UHiRvY6UES

GLSEN is “a national network of students, educators, parents, & community leaders working to create LGBTQ-inclusive schools,” according to its Twitter handle.

“Everyone deserves to be called by their name, and in doing so teachers are able to effortlessly respect their students and enable them to live authentically,” the Trevor Project’s head of advocacy and government affairs, Sam Brinton, also said. The Trevor Project provides crisis intervention and suicide prevention services to LGBTQ youth.

A Brownsburg representative maintains that Kluge voluntarily resigned before the end of the school year, but Kluge claims he only sent in a resignation letter because the school threatened to fire him. “I’m pleading … I still want to work here,” Kluge explained.

Kluge has indicated he will appeal to the school board if he and the school can find no compromise that will allow him to continue teaching at Brownsburg High School.