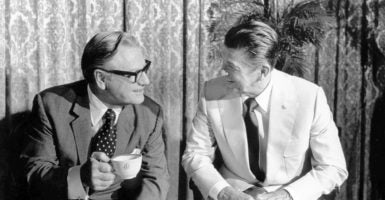 As the farm bill debate heats up, it is important to remember that farm subsidy reform is definitely a conservative issue.

Conservatives believe in free markets, not central planning. They believe in fiscal responsibility, not waste. When something comes up such as the House farm bill and its expansion of farm subsidies, conservatives need to point out this is the very antithesis of conservative principles.

Farm subsidy proponents characterize as anti-farmer anyone who wants to make even the most reasonable and modest reforms to the out-of-control farm handout system.

But they are not anti-farmer, nor were those conservatives in the past who sought subsidy reform. They understood the harmful impact of subsidies and the wisdom in placing our faith in the farmers themselves so they could flourish like other businesses.

After all, would they call President Ronald Reagan anti-farmer? What about House Speaker Paul Ryan?

Leading conservatives have stressed the need to reform farm subsidies for decades, and the reasons they offered over the years remain true today.

Here are just some quotes from leading conservatives.

Who can be happy with government policies in agriculture around the world today? Has there ever been a better example of how bad things can get when governments get too involved? Expensive, destructive, taken together the role of governments in agriculture hurts consumers. It hurts the economies of the less developed countries. It even hurts farmers. What [Ludwig] von Mises said about nations also goes for industries and sectors—the fewer the obstacles to private initiative, the better off they are.

In an effort to cut spending on agriculture, I wrote Secretary [Ezra Taft] Benson suggesting that he consider putting money ceilings on the amounts that any one farm could receive. ‘Isn’t there something we can do,’ I asked him, ‘to avoid using federal subsidies to create millionaires [which in some cases the long-established farm subsidies had done] under programs ostensibly devised to protect the little farmer?’ This idea, though attracting spotty support, was watered down and thus made ineffective by the legislators.

Ryan, from a floor speech during the last farm bill debate in 2013 (the current House farm bill is far worse when it comes to the issues he raised):

Now, we should have a safety net for our farmers. We should help the little guy—the family farm that’s in need. We shouldn’t bankroll the big guys. But that’s what this bill does. It loosens eligibility standards for crop subsidies—and increases the number of people who can apply. In fact, they may not even be farmers.

The farm bill provides farmers with a number of programs to mitigate risk. But there’s a problem when 10 percent of farmers receive 70 percent of the benefits. What’s worse is that the 10 percent receiving most of these benefits are wealthy farmers who use the money to bid up land prices and keep young and beginning farmers from the business. As a farmer, citizen, and legislator, I believe it’s wrong to expect or to allow the government to give unlimited support to my farm or any other farm.

President Calvin Coolidge, on his 1928 veto of the McNary-Haugen Act:

[W]e should avoid the error of seeking in laws the cause of the ills of agriculture. This mistake leads away from a permanent solution and serves only to make political issues out of fundamental economic problems that cannot be solved by political action.

Every time Hoosiers see sugar listed as a food ingredient, they should know that they are paying more than they need to because of the current federal sugar program. I still manage my family’s 604-acre farm in Marion County, so I understand the challenges of competing. Yet, I also know that government intervention to keep prices high for a small group of powerful farming interests violates the free market concept of the American economy.

[There should be a] prompt and final termination of the farm subsidy program. […] Most farmers want to stand on their own feet. They are prepared to take their chances in the free market. They have a more intimate knowledge than most of us of the consequences of unlimited government power, and so, it would seem, a greater interest than most in returning agriculture to freedom and economic sanity.

As Congress debates its farm bill, conservatives should remember their core principles and the consistent views of leading conservatives on the issue of subsidy reform. It is important to get things right, not to just pass something for the sake of passing something.

The next farm bill should be something that reflects conservatism, not cronyism.